After a chilled Sunday we all had our last orientation day. Some information sessions were only in Japanese, which made it a bit boring and difficult to understand. But in general, we learned all the stuff already in school. It is just necessary for them to tell us about the food safety, the standards and rules we have to follow and the company itself.

Our last session was a little Japanese class. It was actually really fun. She said the sentences we learned today is what we need to survive working in a hotel in Japan. To greet someone, you say either Ohayou gozaimasu (Good morning), Konnichiwa (Good afternoon) or Konbanwa (Good evening). But if you greet some of your friends or other people working here, everyone is just saying “Otskaresamadesu”, which is just a casual way to say Hi.

We learned also how to say, “Excuse me” (Sumimasen) and “I am sorry” (Gomennasai). “Sumimasen” is used so often here in Japan. It doesn’t matter if you apologize, try to get the attention of someone or if you just start asking something. You can always say “Sumimasen”. Something which is really important for us is how to say, that you don’t speak Japanese. Everyone is just talking to you in Japanese, even if you are a foreigner and don’t understand them. “Sumimasen. Nihongo ga wakarimasen. Eigo o hanasemasuka? Shosho o machi kudasai. Nihongo no staff o yobishimasu.” were the sentences we needed to practice. Translated it means “Excuse me. I don’t understand Japanese. Do you speak English? Please wait a moment. I will get Japanese speaking staff.” It is just better than saying nothing and being lost.

The day after the third orientation day was the outing. I didn’t even know that we will have something like an outing, trip or team building. But I was happy as I heard it. The only thing I wasn’t so happy about was that we have to get up super early.

The reason for this trip was not just to have fun and strengthen the team, but also to have some recommendations for the hotel guests. It is always the case that someone is going to ask you which temples and shrines they should visit, where they can see the beautiful Ume and Sakura trees or what kind of food they have to try in Kyoto. As a staff member you should know the most popular places and perhaps some secret tips. But you have to be also aware of things like constructions, the blowing season of the cherry blossoms and opening hours of shops and restaurants. Otherwise the guests are going to be very disappointed.

As I said before we met up quite early at the closest Subway station from the hotel. At 6:10am we all were ready to leave to Tenryu-ji Temple, one of the most popular temples here in Kyoto. The temple is open for the public around 8am, if I am not wrong. Our General Manager organized just for us a traditional Zen Ceremony with a monk. It was an amazing feeling we entered the temple and saw the World Unesco heritage garden of this temple. Normally this place is crowded with many tourists. We had this place for us alone. Incredible! 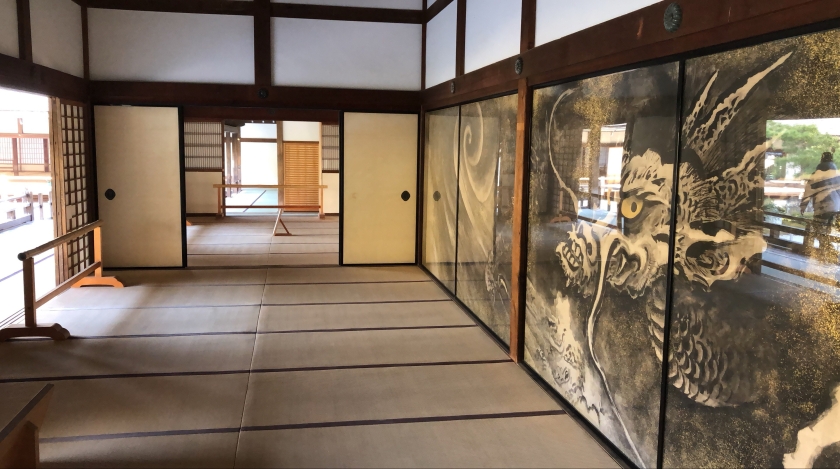 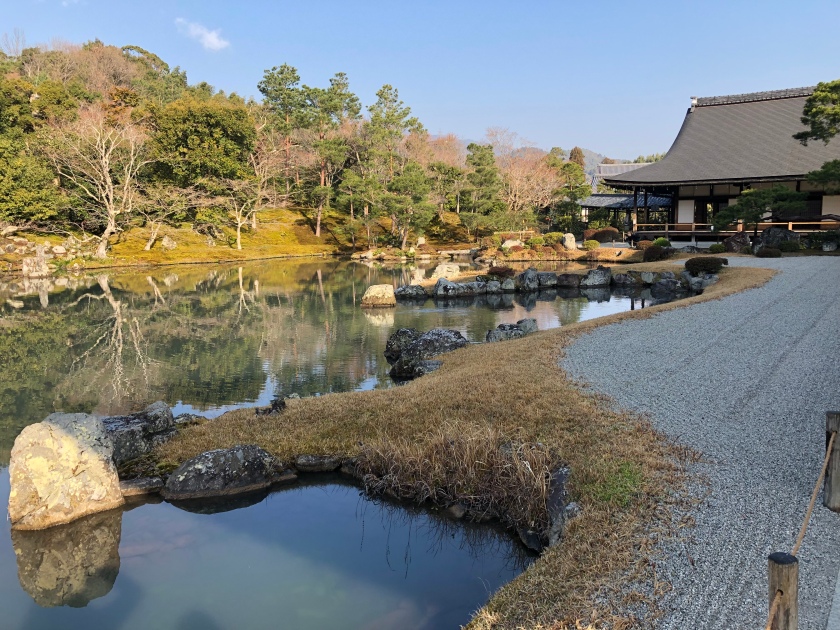 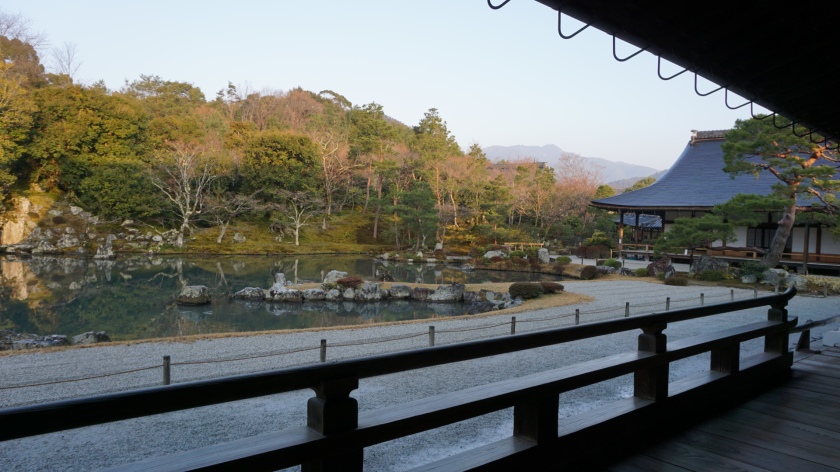 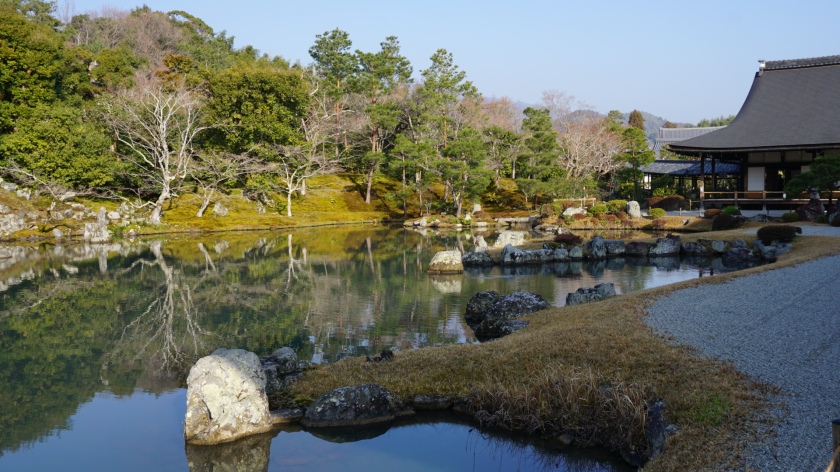 We were so lucky with the weather as well. The last day were just rainy and grey. Today the sun shined the whole day. We couldn’t catch a better day. Nevertheless, it was super cold so early in the morning. We all grabbed a cushion to sit on during the ceremony. With the Tatami floor, wooden walls and the white almost transparent sliding doors, the room of the temple looked just like you have a traditional Japanese room in mind.

When the monk said we should take of our Jackets and socks we were all like… are you kidding? It was so freaking cold sitting on this floor that we were already freezing. But well! The ceremony started.

He first explained us how a Zen Ceremony works and what rules we have to follow. We all sat there on our cushions, folded legs, our hands forming a circle which leaves space for Buddha, breathing slowly in and out and staring down to the floor to have our eyes half closed half open. First, we had to meditate for 10 minutes. During these ten minutes the monk walked twice in front of us with a wooden stick in his hand. He was so serious about it. Every time he passed, I was so scared that I will do something wrong. If someone made a mistake the original monks got punched with his stick 3 times on each shoulder. For some people who wanted to experience it he actually did it. Ouch!

After the 10 minutes we had a 2 minutes break. We were all already dying. Our legs, as well as our back hurt and my feet were already asleep and nun. It was just so funny that everyone was suffering and felt the same. But we weren’t done yet. The next session was for 15 minutes. The same procedure as before, but it went faster than the first round. 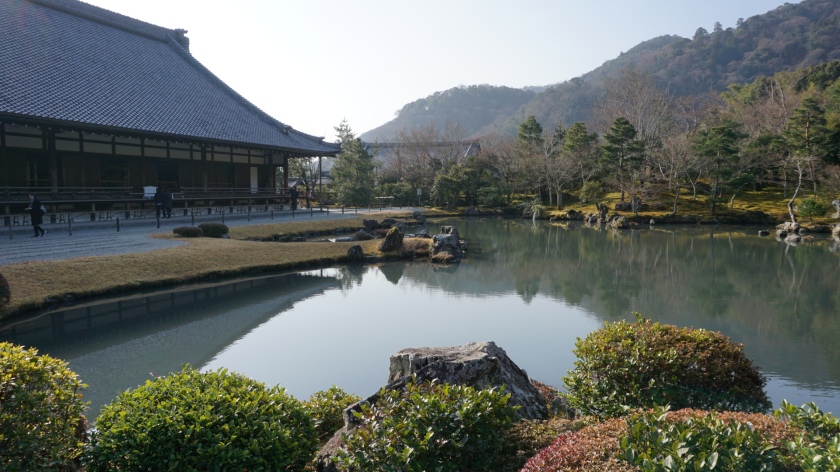 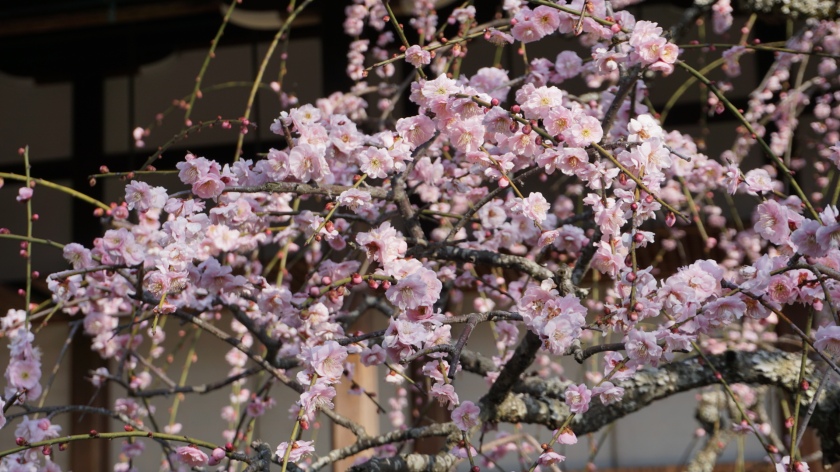 After we finished our ceremony, we had time to explore the temple area a bit more. We were so lucky to be here that early in the morning and to have this amazing place for us alone. The atmosphere was so peaceful, relaxed and just super special. It was beautiful.

Next to the temple is the very famous Bamboo forest of Kyoto. Unfortunately, our instructors didn’t give us the time to work through the forest. We could just have a quick look. I am hoping to come back here to see the forest in his full beauty. But to get here is not that easy. We took the subway and a different little old-school train. I don’t know if I would have found it on my own. The public transportation system in Kyoto is definitely not that advanced as in Tokyo. You drive the bus much more often, because the subway has just two lines or so. I don’t even know how many 1000 of lines the subway in Tokyo has. 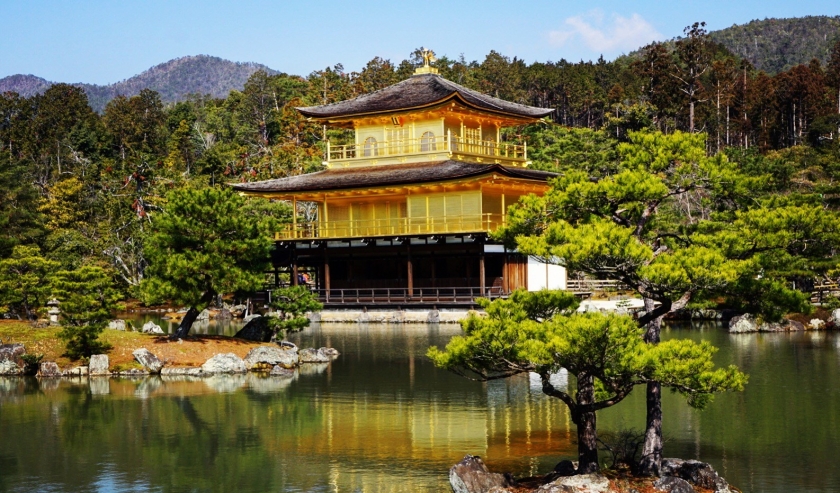 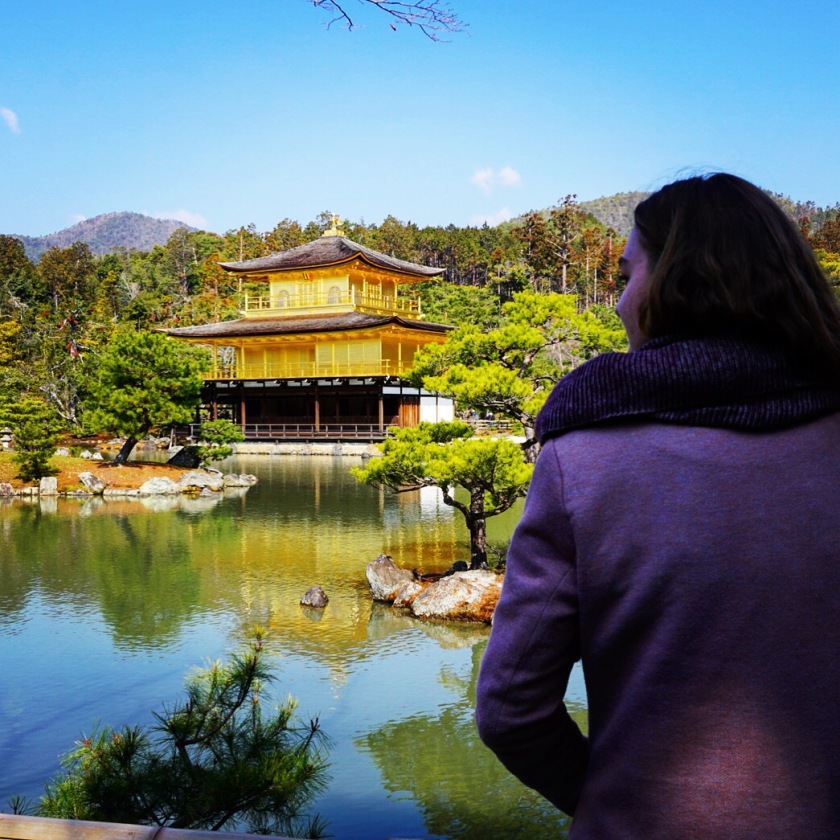 After this unique experience we went to Kinkaku-ji Temple, which means translated the golden temple. The roof of this temple is made out of real gold. Even early in the morning and at the low season many tourists are there to see this beautiful building. It is a must see when visiting Kyoto. I really loved the scenery of this golden temple in the middle of a little lake. Especially during winter or autumn this place supposed to look even more beautiful. But it was already a nice experience. 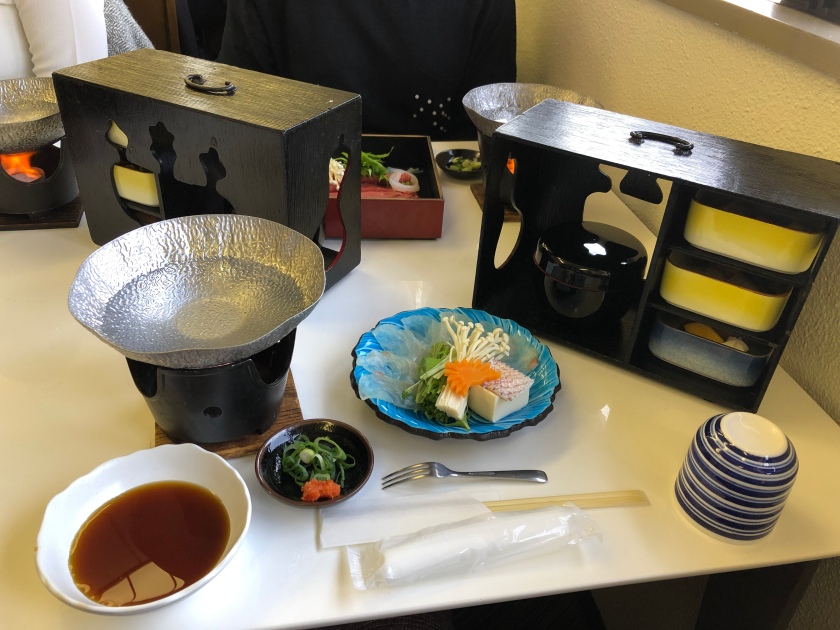 After Kinkaku-ji Temple it was time for lunch. We ate traditional Shabushabu, which is perhaps comparable with a meat fondue, we used to eat at special occasions, like Christmas, in Germany. The Japanese version of it is called Shabushabu. Everyone got a bowl of water boiling over a candle and a plate full of ingredients. Usually you get mostly beef, but I got fish instead. After cooking the meat, vegetables or fish in the water you dip it in the sauce and eat it together with rice. Next to it we had a shelf full of little cold dishes. The food was good, but not my favourite I ate here so far. 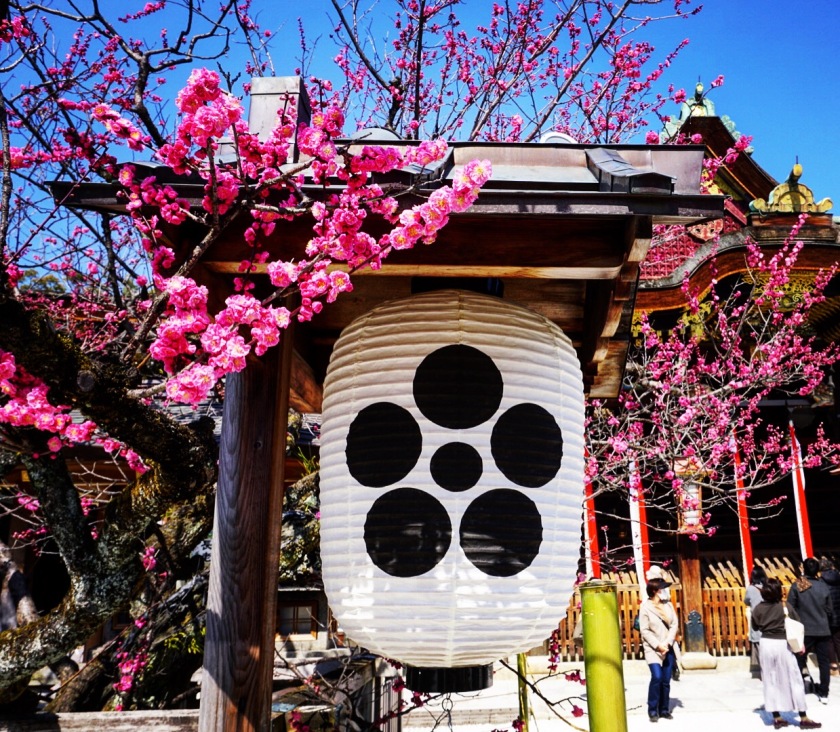 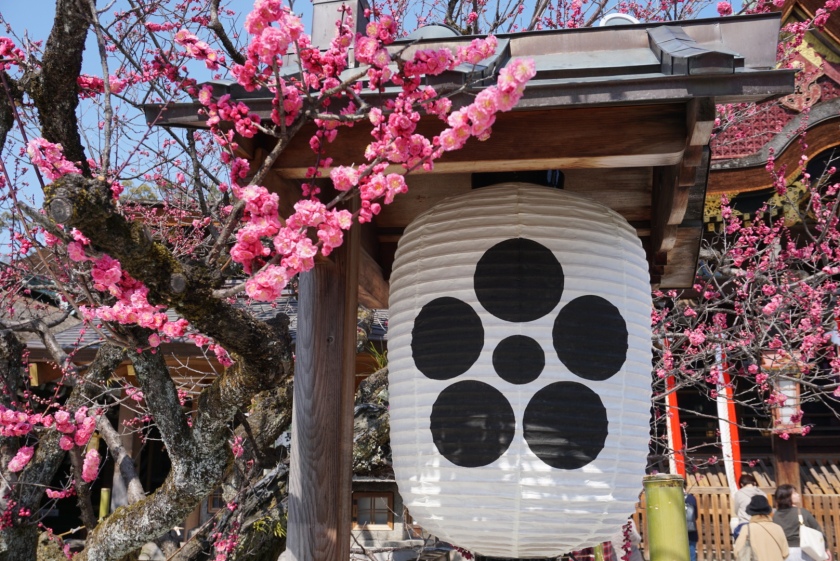 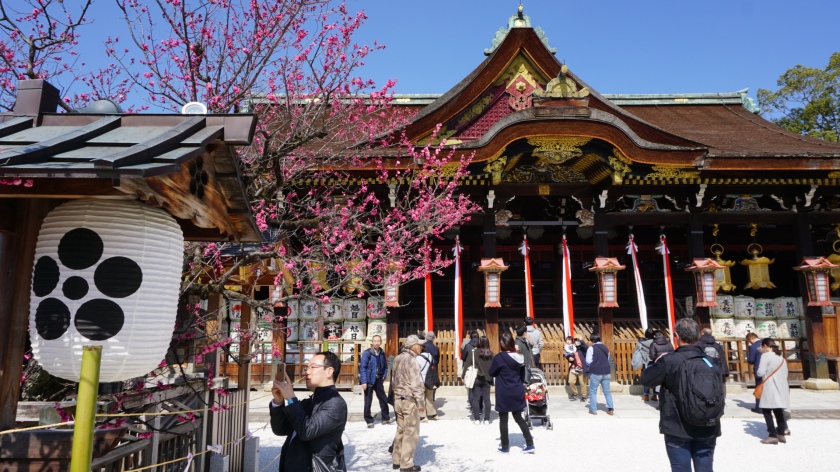 Last but not least we went to Kitano Tenmangu Shrine. Perhaps some of you don’t know what the difference between a Shrine and a Temple is. Basically, the difference is in the religion. A temple represents Buddhism, where else a Shrine represents Shintoism. In Japan most of the people believe in both. Temples are a place to pray to Buddha. They believe that you will be reborn after your death, depending in how good you lived your life before.

Shintoism is a religion which believes that god is in anything you see. If it`s a stone, a tree, a building or whatever else. It is a very spiritual place. Shrines are mostly free to go in, where else temples mostly have an entrance fee. 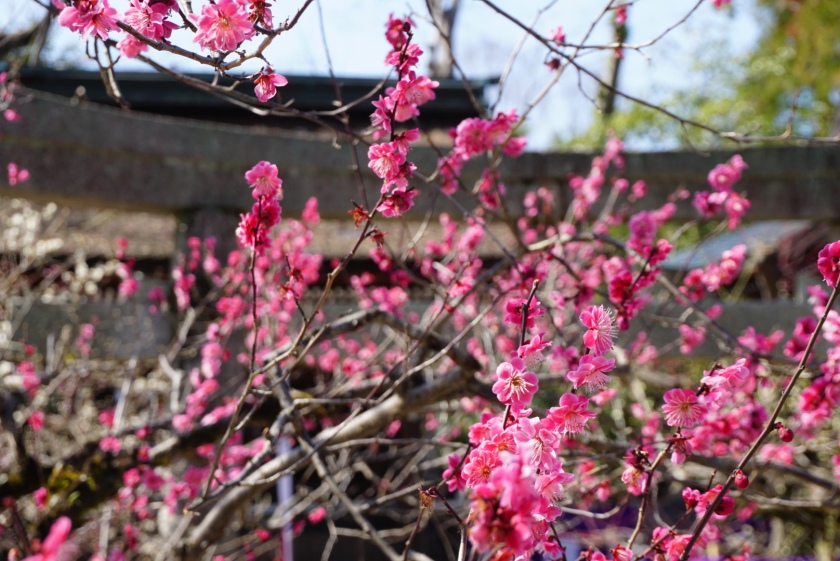 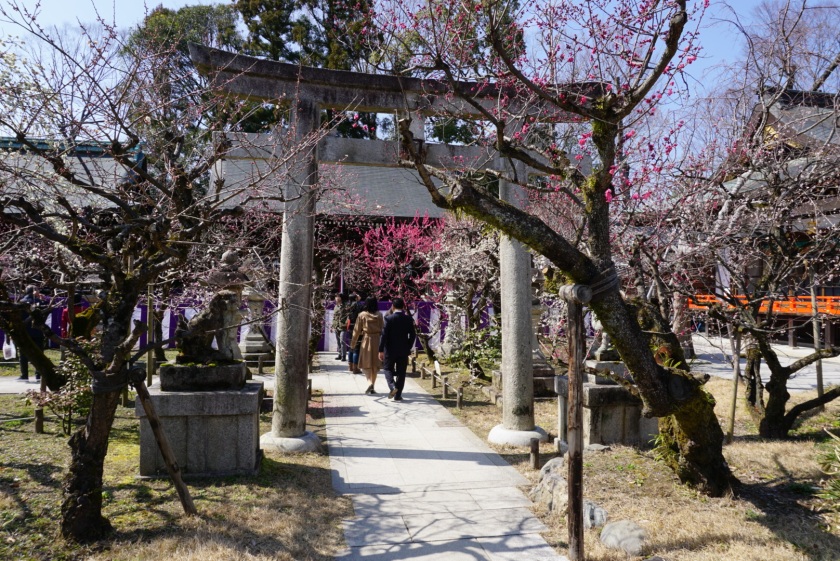 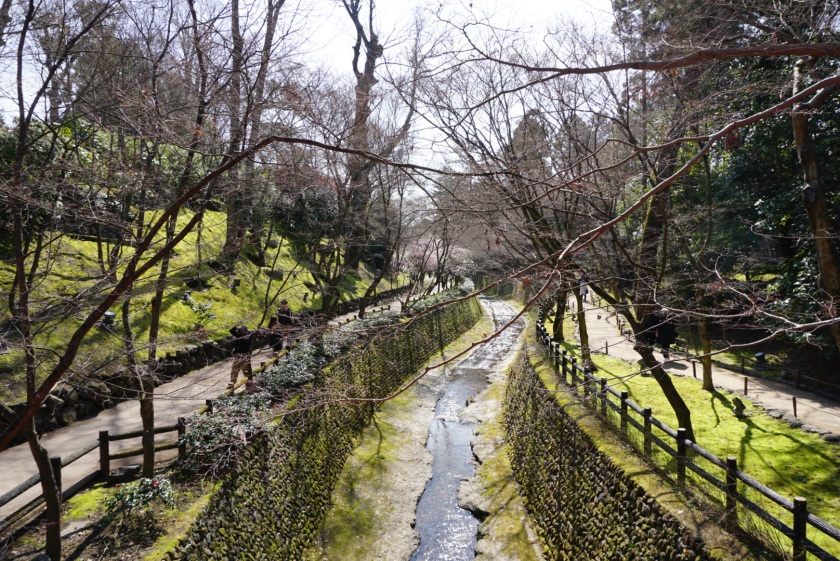 Kitano Tenmangu Shrine is also the perfect place to see Ume. Ume and Sakura are the popular flower trees, which are just on a very specific time of the year visible. We were lucky to see Ume trees at the Ume garden. It was beautiful and I am looking so forward to the Sakura season. I hope I will have a bit of time to see beautiful places around this time.

It was already after 2pm when we headed back. I went straight from the bus station to the Post Office to open up a new bank account. In order to get our salary, we need a Japanese account. We got all the documents already at the orientation day. Because everything is written in Japanese, we filled it already out, to avoid being lost at the post office. That’s what I thought.

When I arrived, everything seemed to be fine. But they wanted me to write my name in Katakana. Of course, I didn’t know how to write my name in Japanese. How should I know? I just thought “Nihongo ga wakarimasen”! They told me I should come back with someone who speaks Japanese. No way! I just wanted to get it done. I asked Kazuki, a Japanese friend from school, to text me my name in Katakana. Luckily, he was online, and it worked out. I just couldn’t believe that no one there spoke a word English. Again! He translated everything with Google translator. So, I did as well.

After a while they asked me to write my address again in Chinese and Japanese. WTF! It took me ages to write these weird characters. But I made it… somehow! Don’t ask how.

After I waited there for over 1,5 hours the guy at the counter said that I have to fill out the same document again, because my name was to long for the first time. Kiddddiiiiing??? It took me ages to write everything in Japanese and now everything again. The guy tried to write everything with a pencil as a guideline, so I could just write with a pen over it. Super cute! But still. I was too tired anyway to be annoyed. And then…finally after 2 hours I had a new bank account in Japan. Jesus!

Right next to the Post Office was a supermarket I wanted to check out. That one is actually the best and cheapest one I found so far. And it is just 5 minutes away from my apartment. I went back home, chilled a bit and made something for dinner.

It was super nice today to see a bit more of Kyoto, learn something about the traditions and see one of the most popular attractions. And I made a bank account! Yay! Now, the work can start! But I actually wished I could just be here to travel! Well.. I am not here for holiday!