Finally! How long I have been waiting for this moment. My mum and my sister arrived in Kyoto. I was so glad that they decided to come the kong way from Germany to Japan just to visit me. I just wanted to show them where I live and what I experience here.

I needed to work in the morning and asked my supervisor if I could finish on time today. First, I planned to pick my family up at the train station, but at the end we decided that I come directly to their hotel. It was such a coincidence when I walked from the Ritz Carlton to the hotel, they were staying in. I arrived and decided to walk to the reception, because we didn’t have any WIFI in order to communicate. And guess who were standing there to check in? My mum and my sister! My timing couldn’t have been better. It was so nice seeing them here and it felt like I would never have never been away from them.

Normally it is not allowed for “non-guests” to enter the hotel rooms, but the receptionist was so friendly and allowed me to go with my mum and my sister to their room. The hotel made a super nice impression. That’s when I realized how much I wished to be on vacation instead of living in such a small and minimalistic place.
Of course, we had a lot to talk. Furthermore, they showed me all the things they brought for me from home. So many snacks, clothes and other things I cannot buy here. I was super happy!

Afterwards I showed them where I am living. The hotel is just a 10 minutes’ walk away to my place, which is pretty convenient for the next days. There wasn’t much to show, but at least they saw where I am staying half a year.

After that we made our way to Teramachi. It is probably not so exciting for you guys to see the next posts, because I’ve already been to most of those places. But I just wanted to show my family the best spots in Kyoto. If you have planned to visit Kyoto and Osaka for a few days, the next blog posts could be your guide. That’s how I felt, like their personal guide. 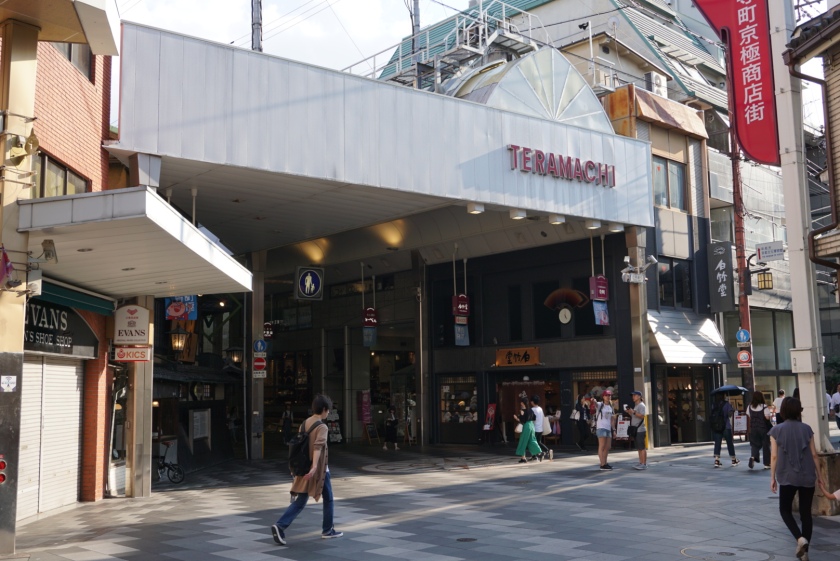 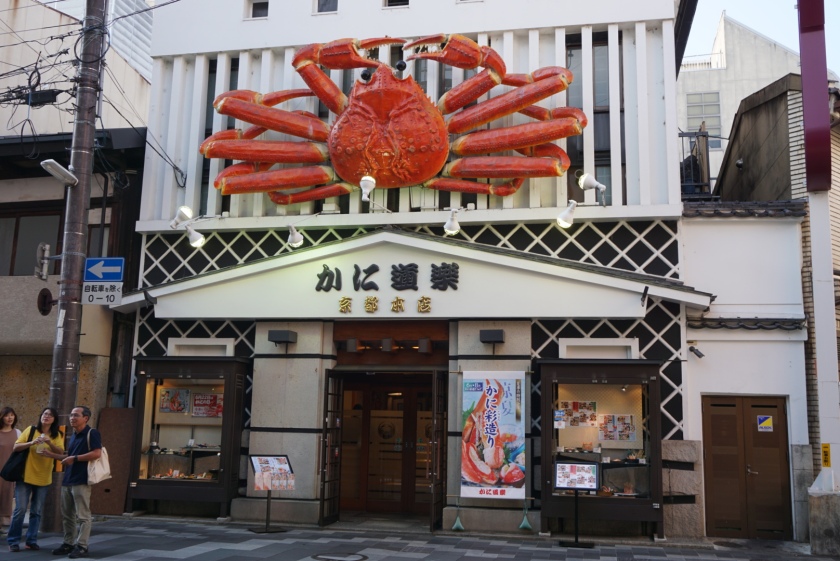 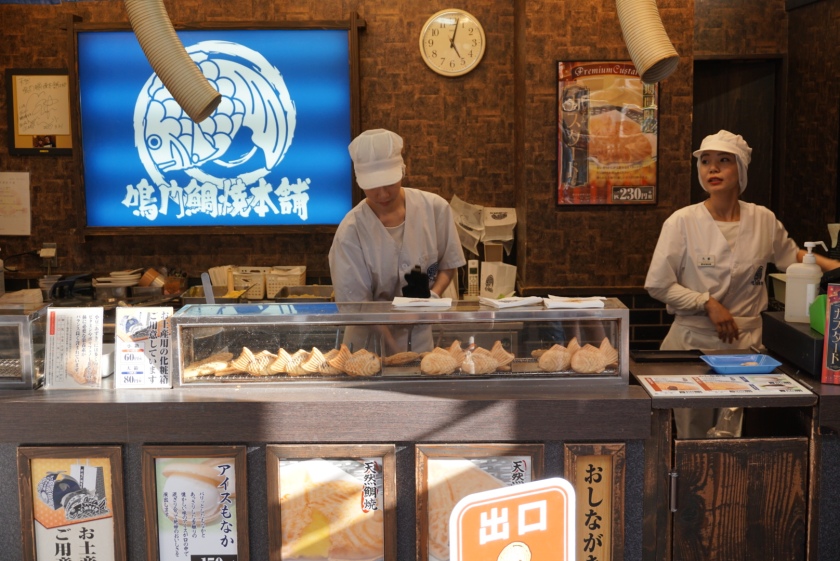 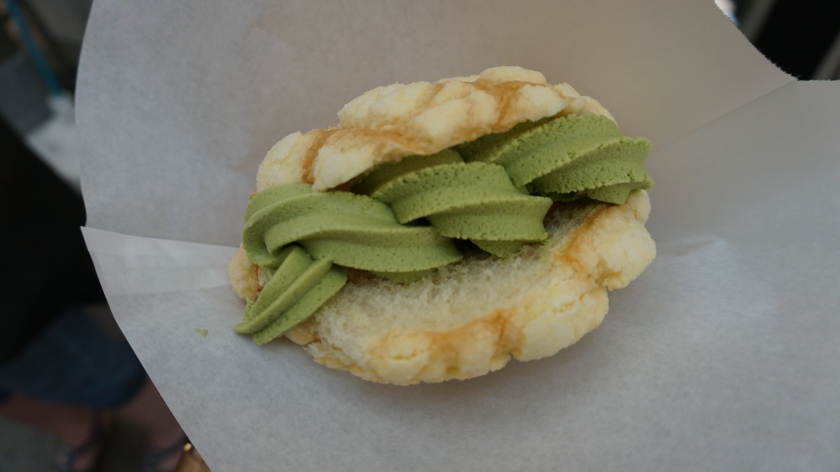 In Teramachi, I showed my family some shops and interesting foods. We decided to try Melonpan, because that’s one of the most famous Japanese dessert here. “Pan” is the Japanese word for bread. So, translated it means Melon-bread. It doesn’t have anything to do with melon flavour. Just the shape and the structure of the bread reminds of a melon. You can have the warm bread plain or filled with Vanilla or Matcha Ice cream. We chose Matcha ice cream, so they could try two Japanese desserts in one. Something that not every foreigner knows is that you aren’t allowed, or you shouldn’t eat or drink when walking, even if you buy it on the street. For Japanese people that’s a really rude thing to do. The Melon Pan was quite nice. We liked it! 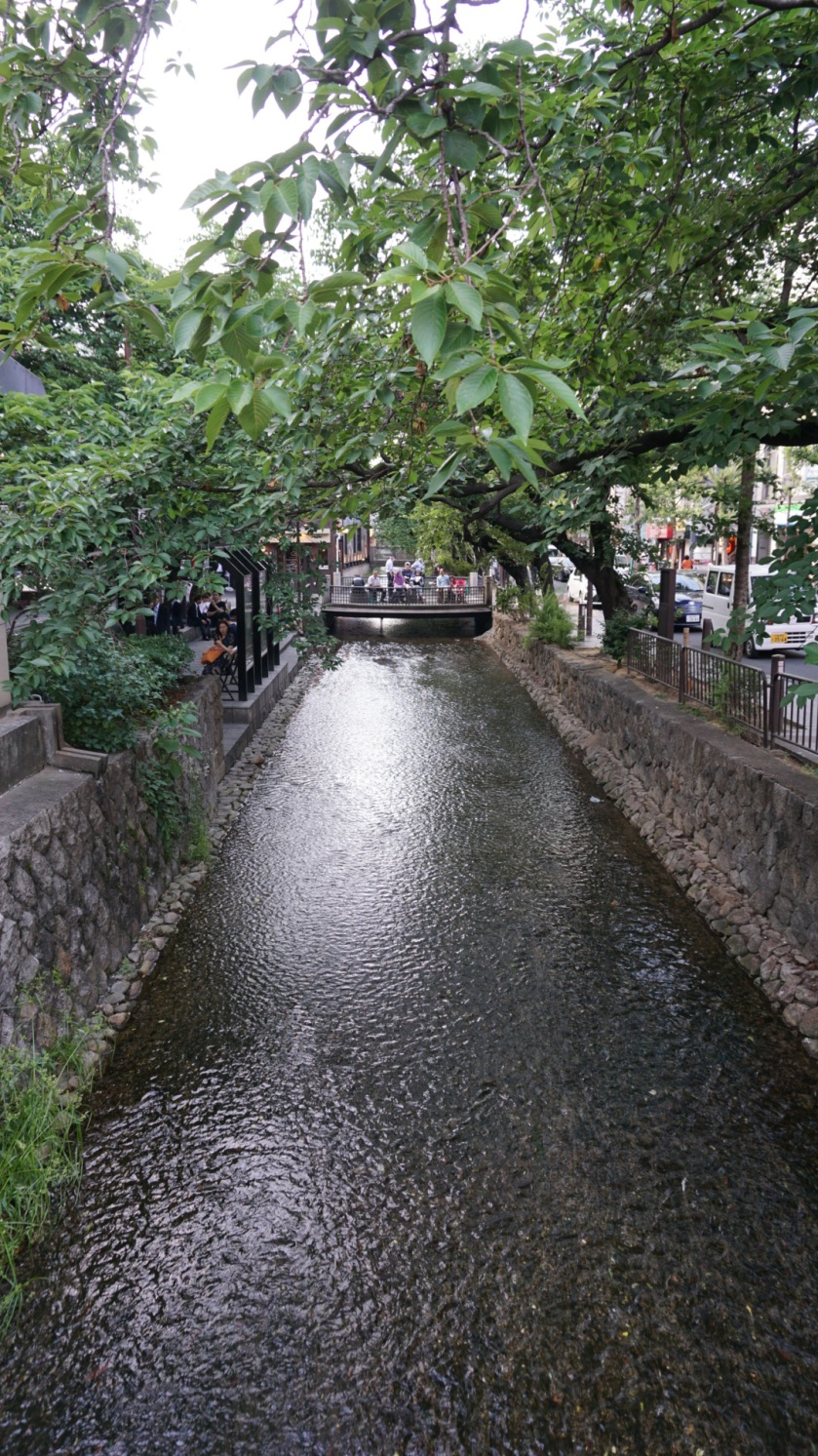 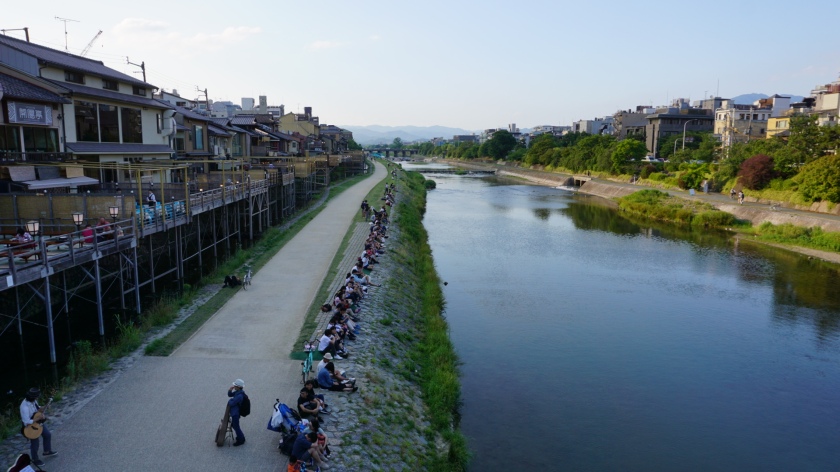 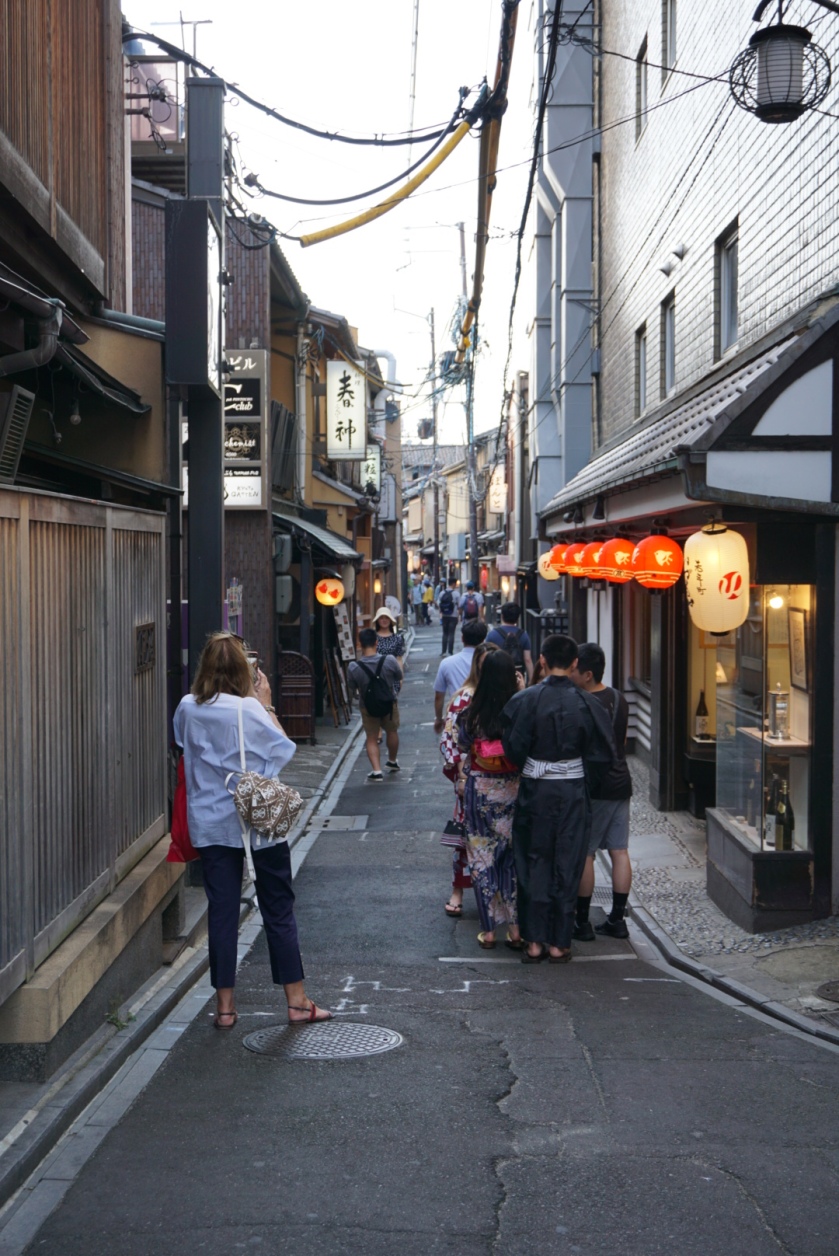 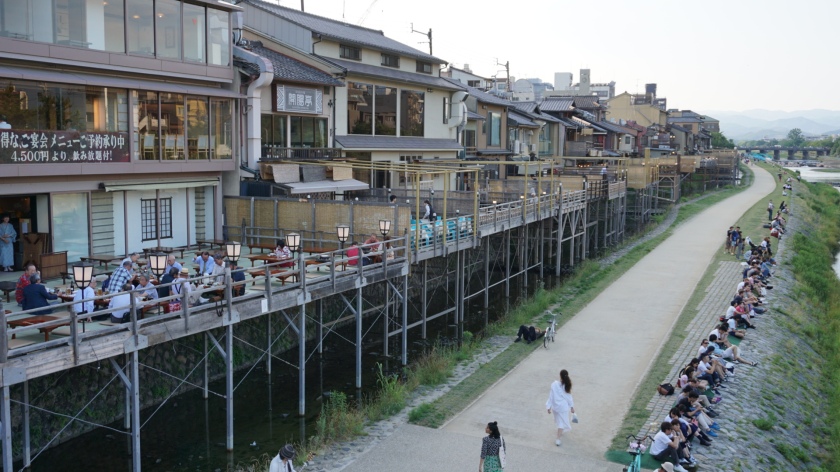 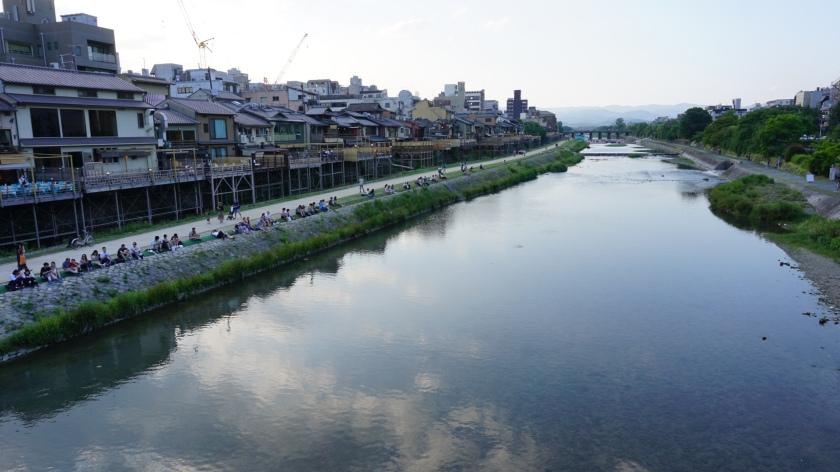 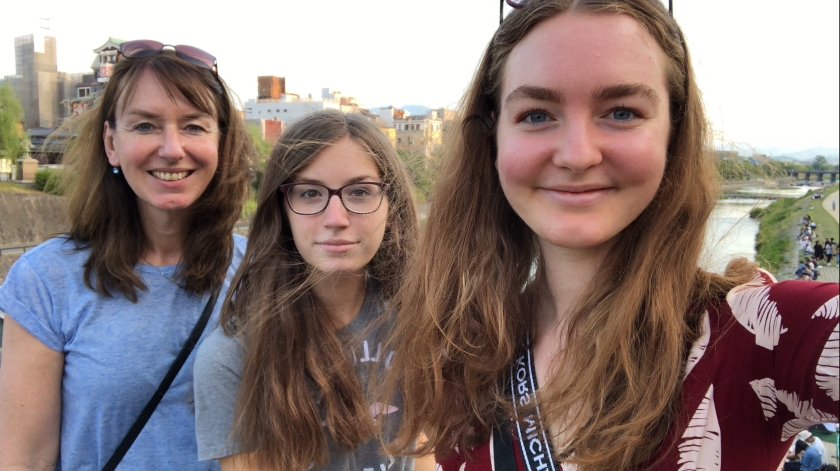 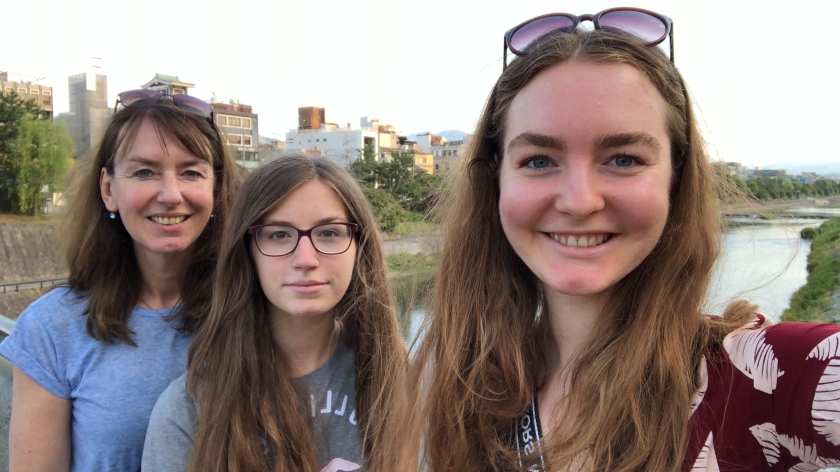 Afterwards we made our way to Gion. I was so happy that the weather was incredible this day. I wished it would have been the whole time like that. The atmosphere at the Kamogawa River was amazing. The musicians, the nice weather, we all together, it couldn’t have been better! 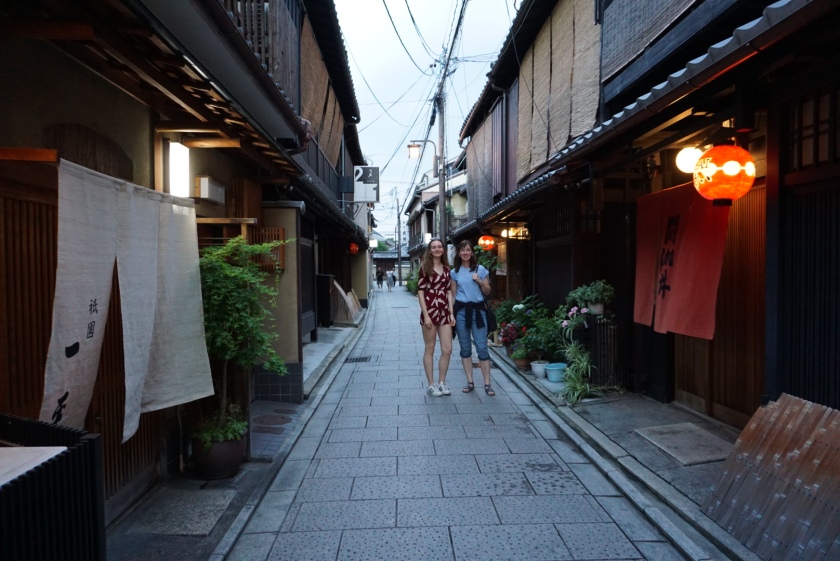 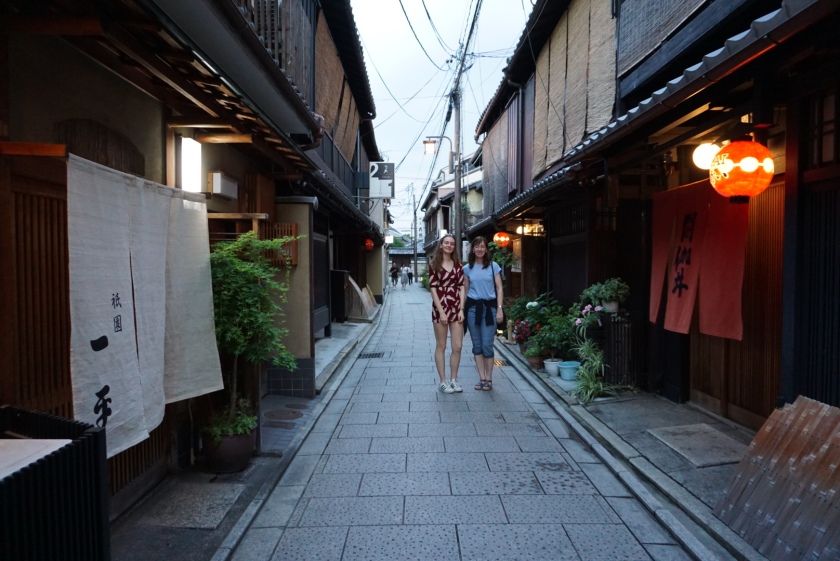 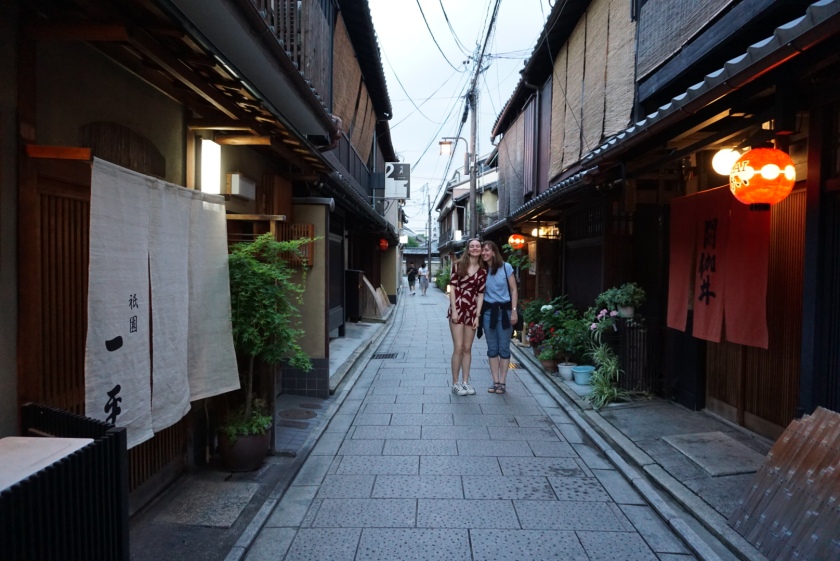 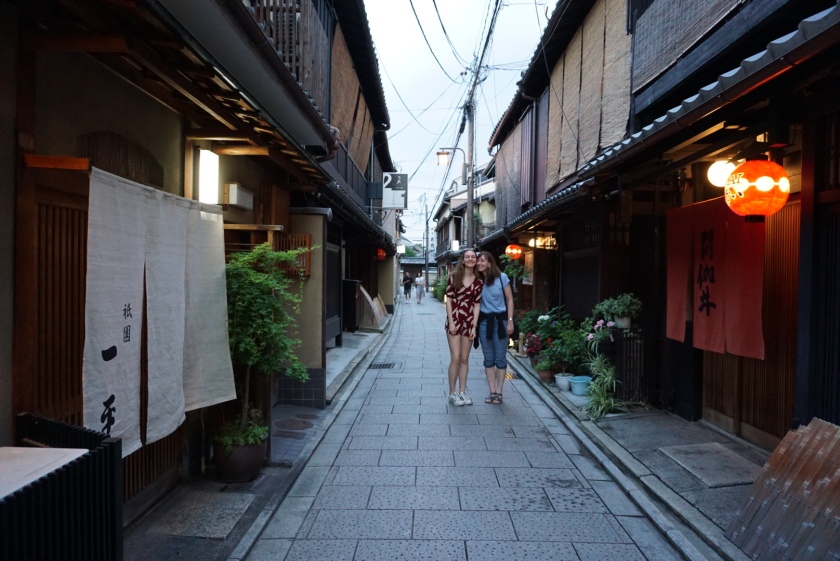 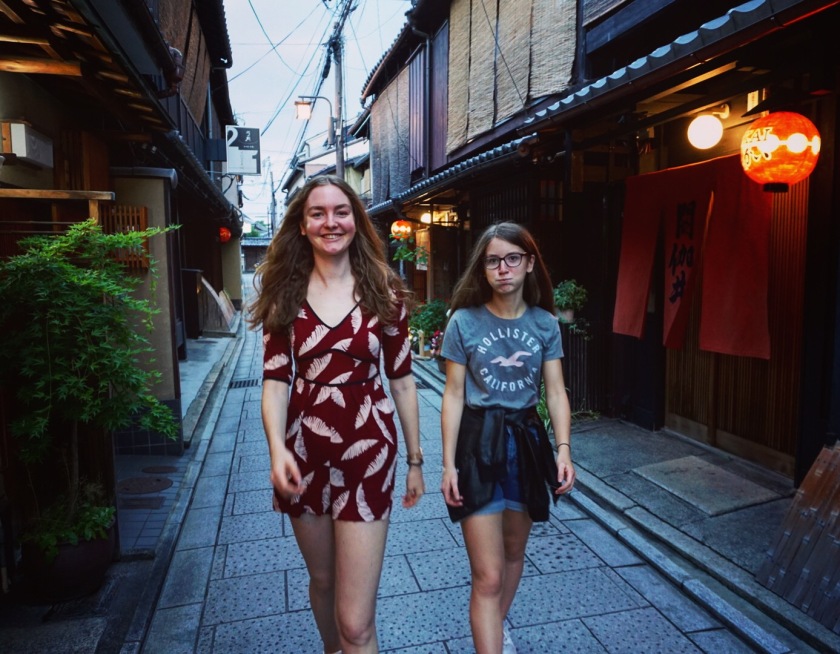 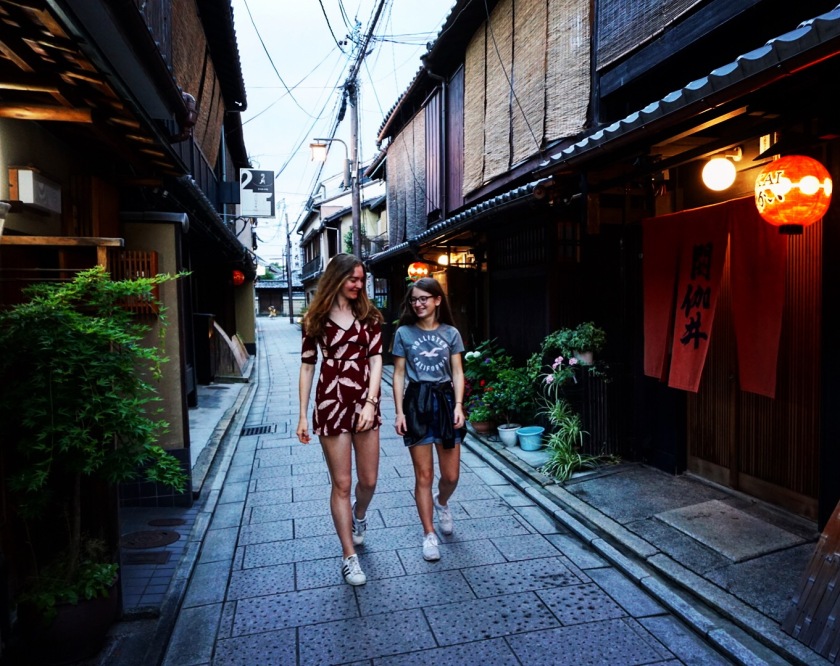 In Gion I showed them the most popular shops. My sister really wanted to try Mochi. I just realized how I already got used to the Japanese culture, the food and the people. For my family everything was so foreign, new and different. 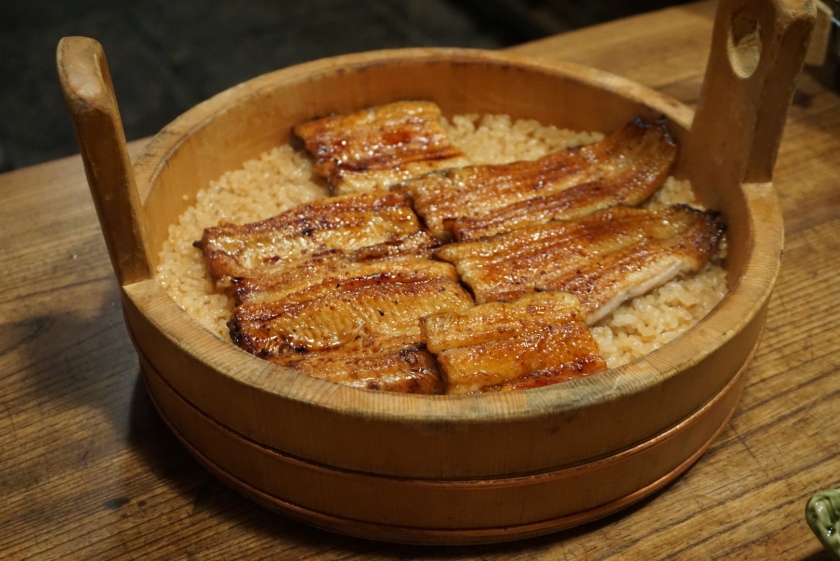 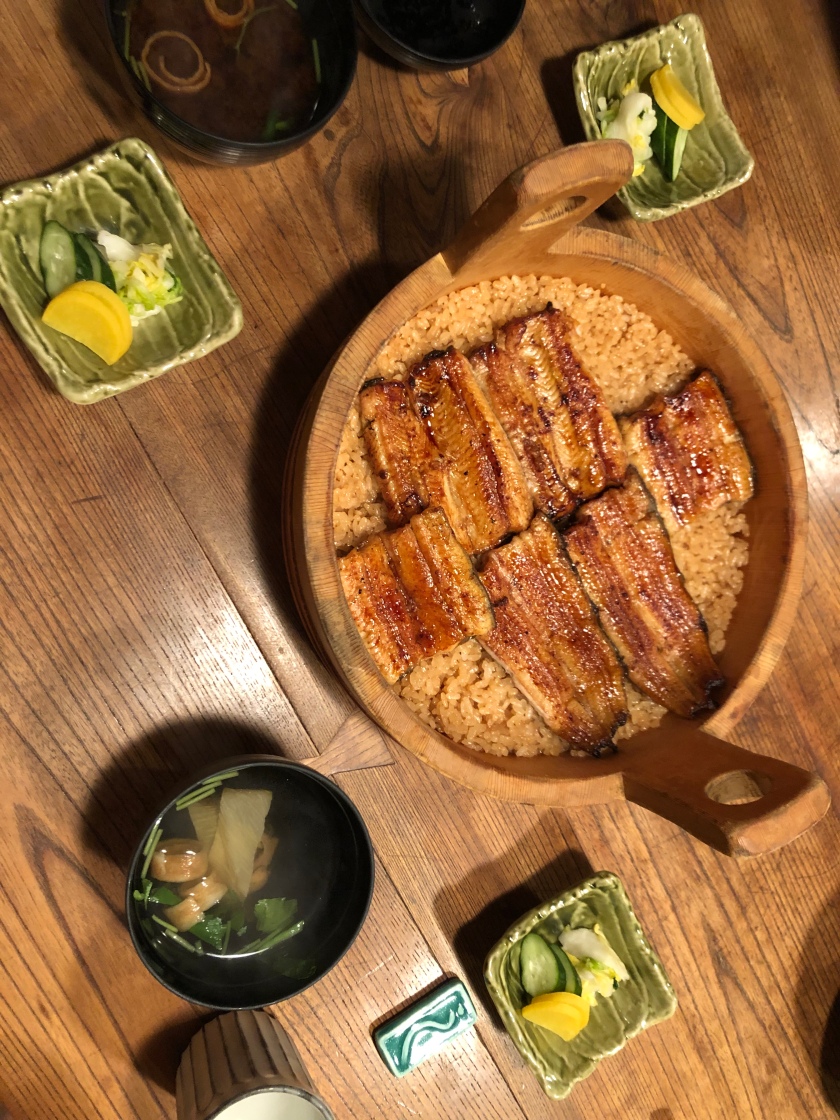 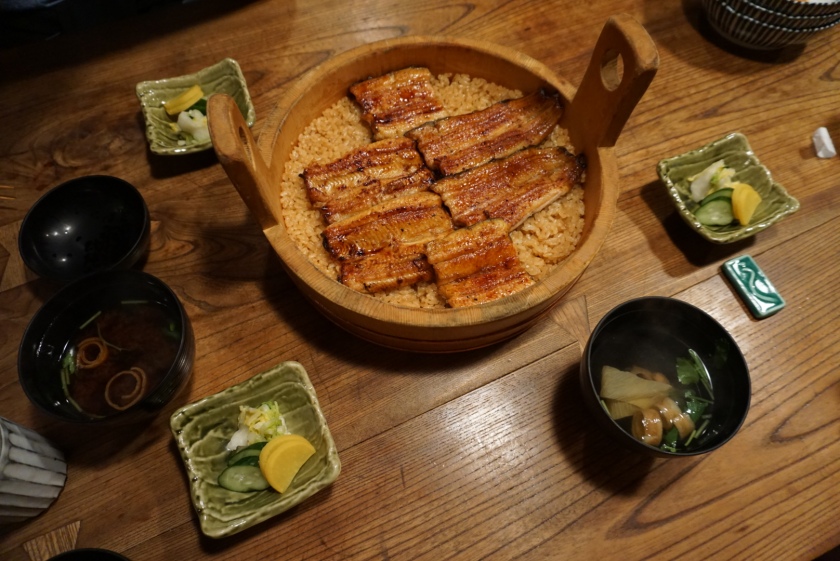 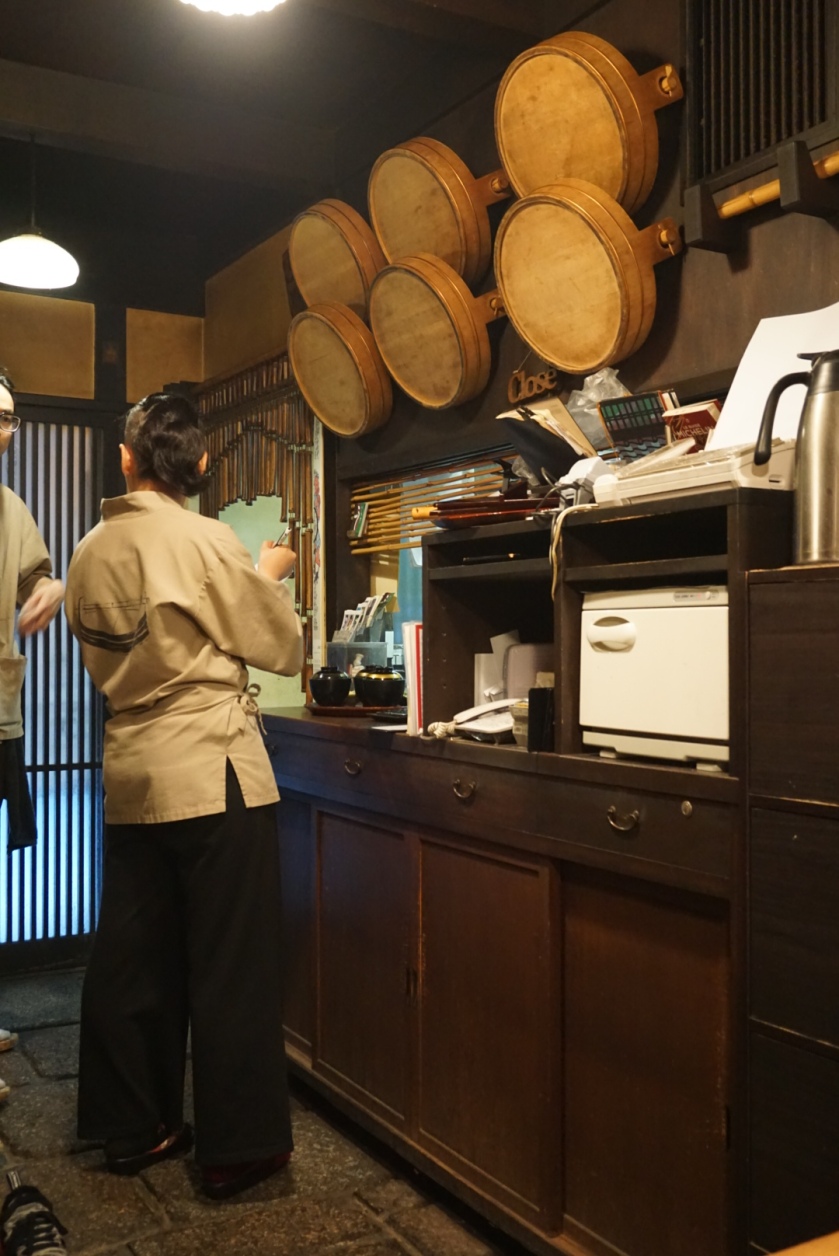 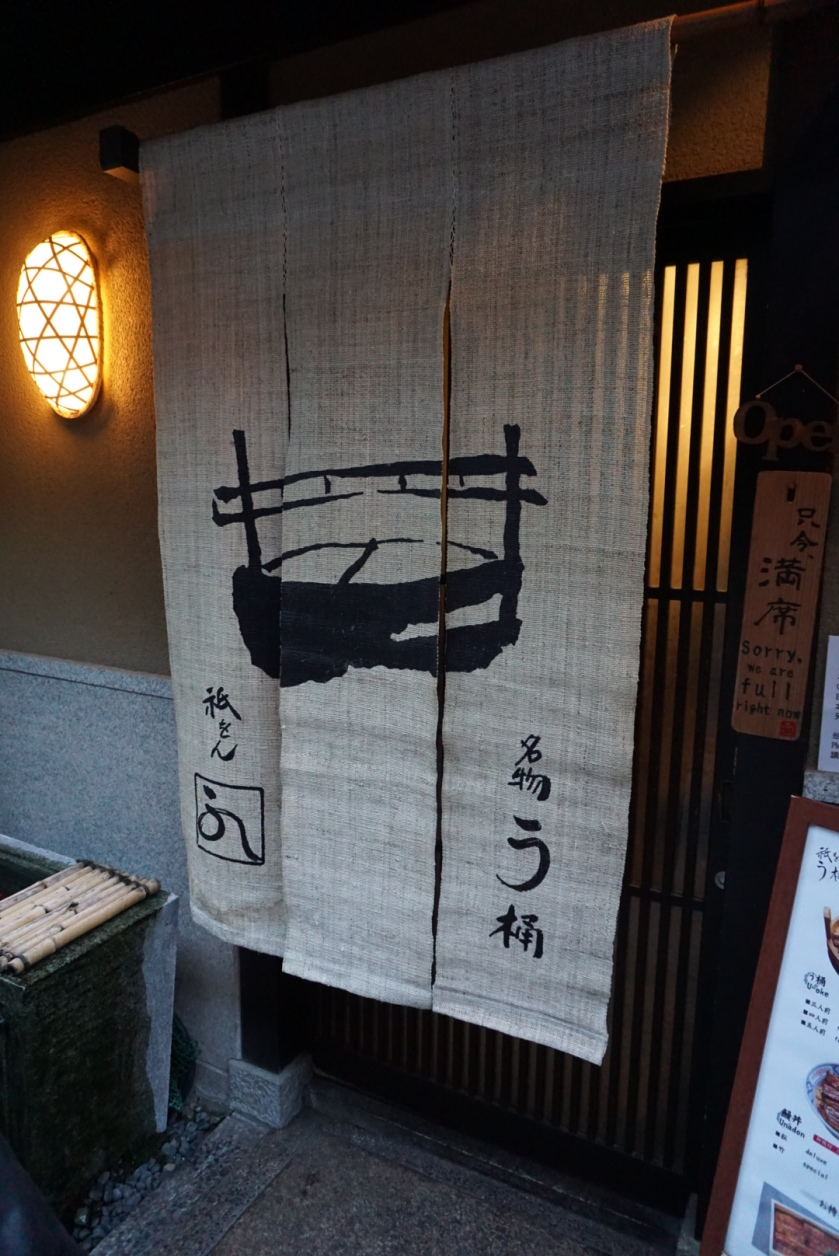 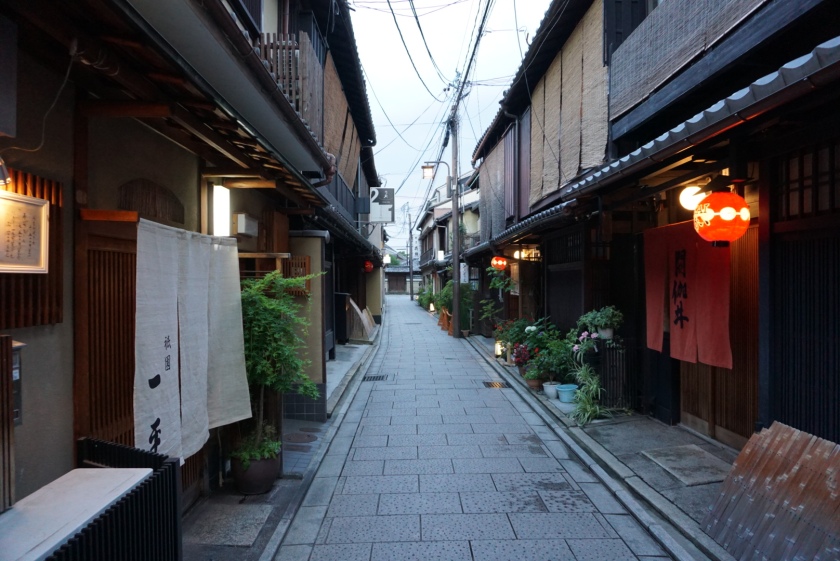 For dinner we decided to go to a special “Unagi” place. Because I don’t have a Japanese number, I am not able to call or make any reservations. Therefore, we were very lucky to get a free place. The fish was really nice and just melted in your mouth. A product, that you can’t get in Europe! In Japan it’s a real delicacy. It is and looks simply, but that’s what Japanese cuisine is like. They want to appreciate the quality of the product without a lot of seasoning or spices. 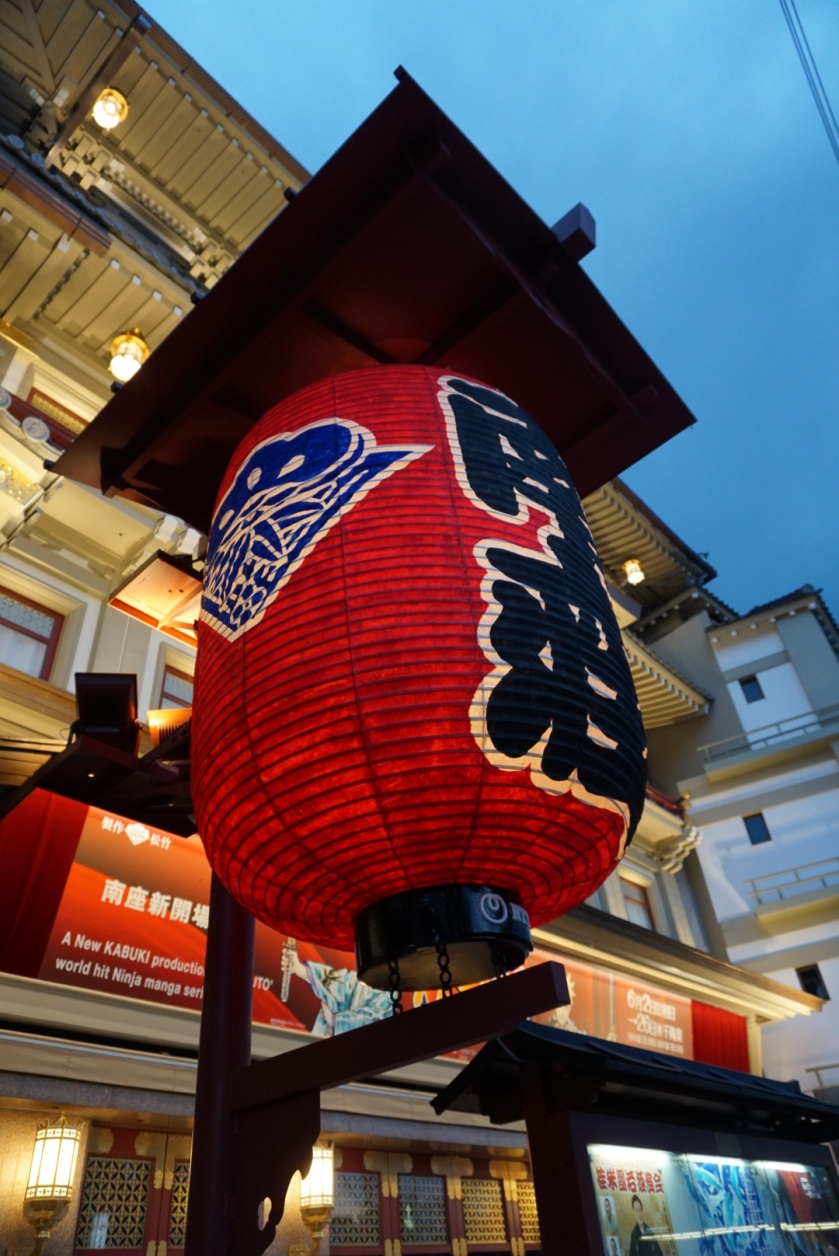 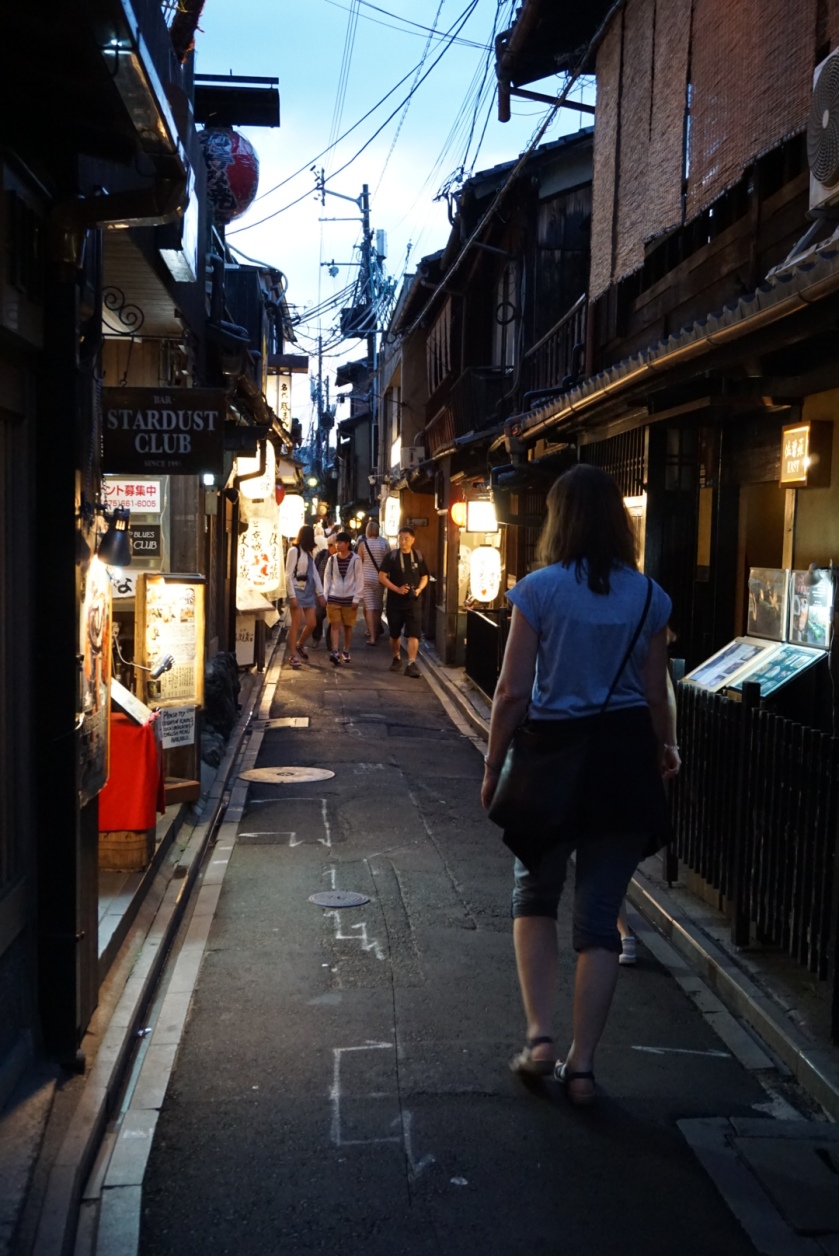 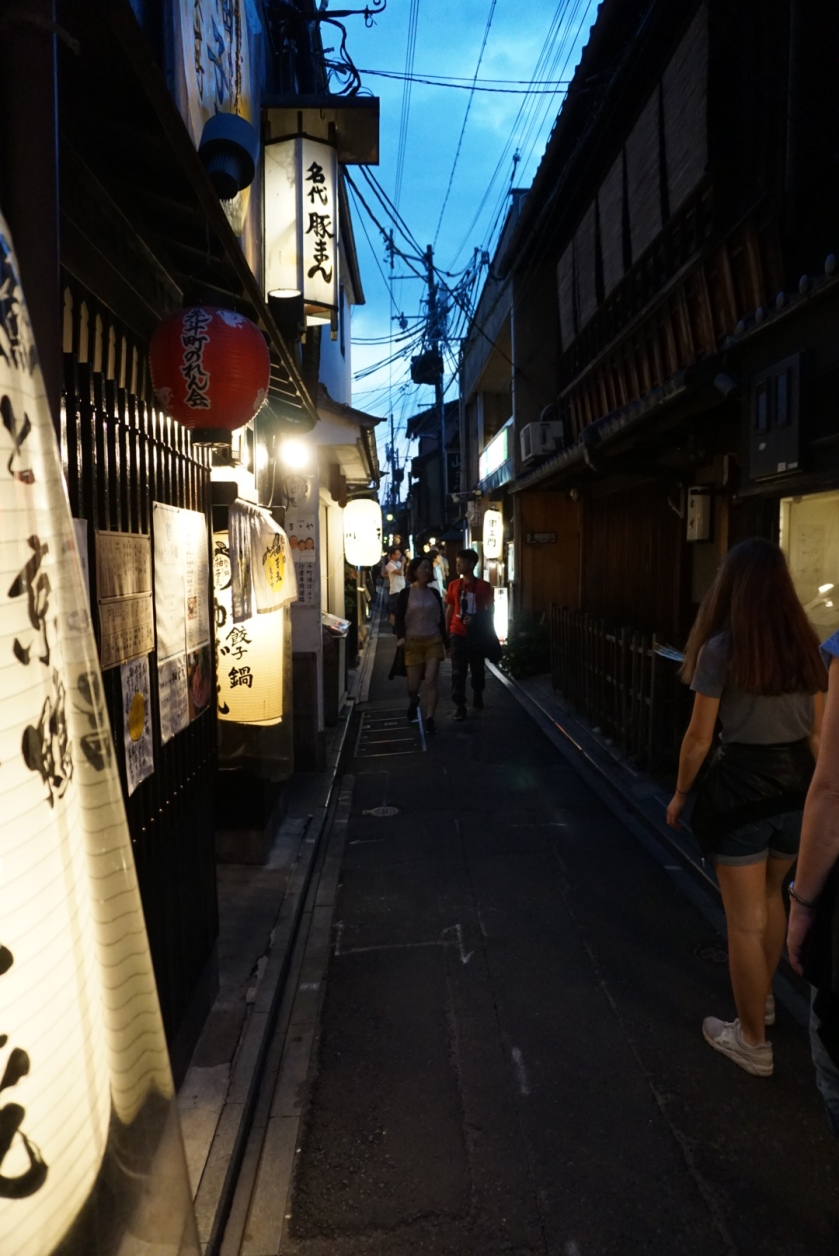 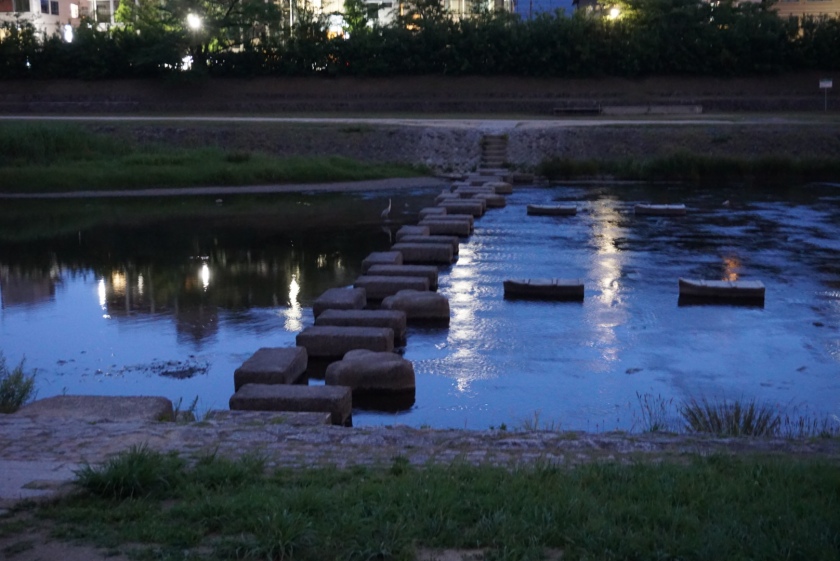 Afterward we walked across the bridge, through the Pontocho street and along the river to The Ritz Carlton hotel. We were sitting there for a while, talked and discussed the plan for the next day. I was just hoping that it is not going to rain 24/7. But even if it rains, we are going to make the best out of it!