Unfortunately, it was already our last day in Korea. We were very happy with what we saw and experienced the past days. We couldn’t have done it better. Therefore, we had time on our last half day to do what we were feeling like. We slept a little longer than the last days, got ready and checked out of our accommodation.

Afterwards we took the subway to Gyeongui Line Forest Park, because we thought we haven’t been there yet. At the end it was just the same thing, as when we went to Hondae. Nothing special and not worth the effort. Therefore, we decided to go straight to our breakfast/ lunch location. We both were craving for some healthy food. That’s really hard or almost impossible to find in Japan. Because the fruits and vegetables are so expensive and something luxurious there, you will not find many places that are offering smoothies or healthy lunch bowls. It is not so easy to find places like that in Korea either, but definitely more likely. We decided to give the restaurant “Plant” a chance and we weren’t disappointed at all. 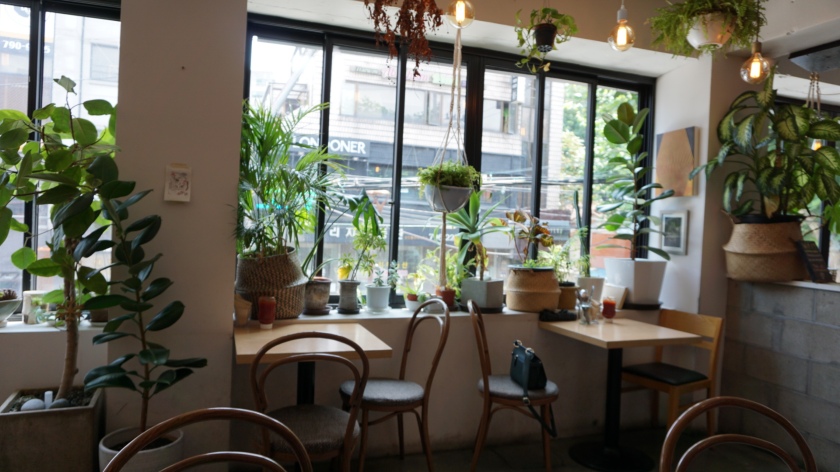 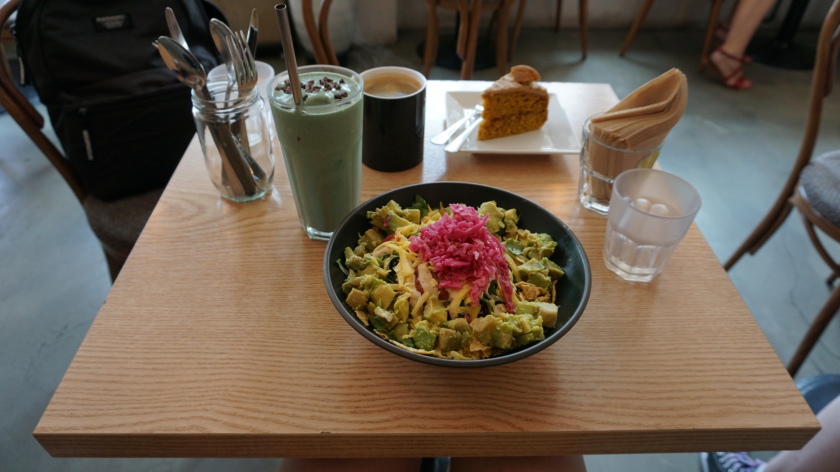 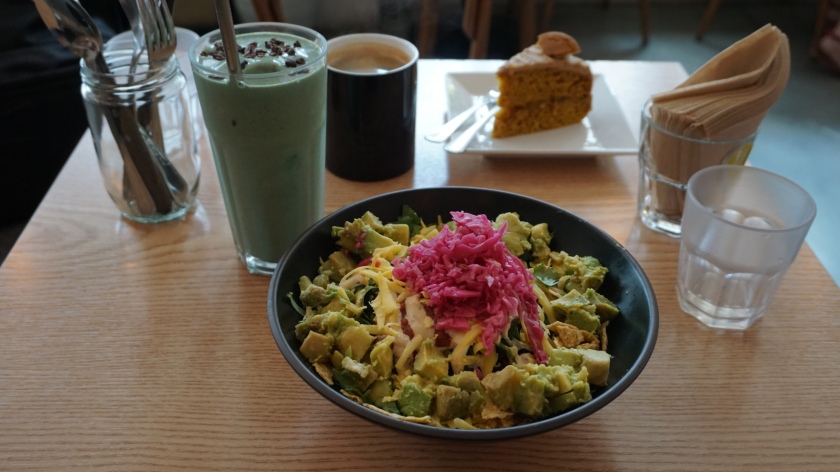 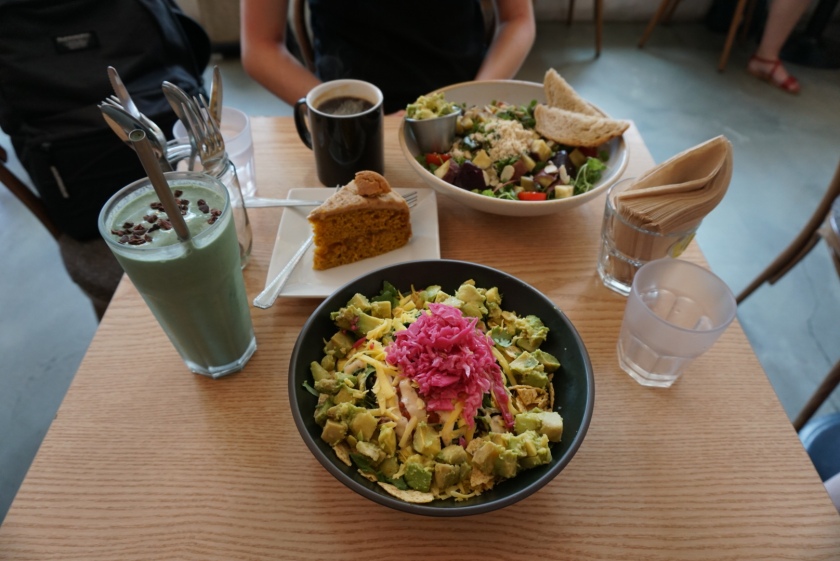 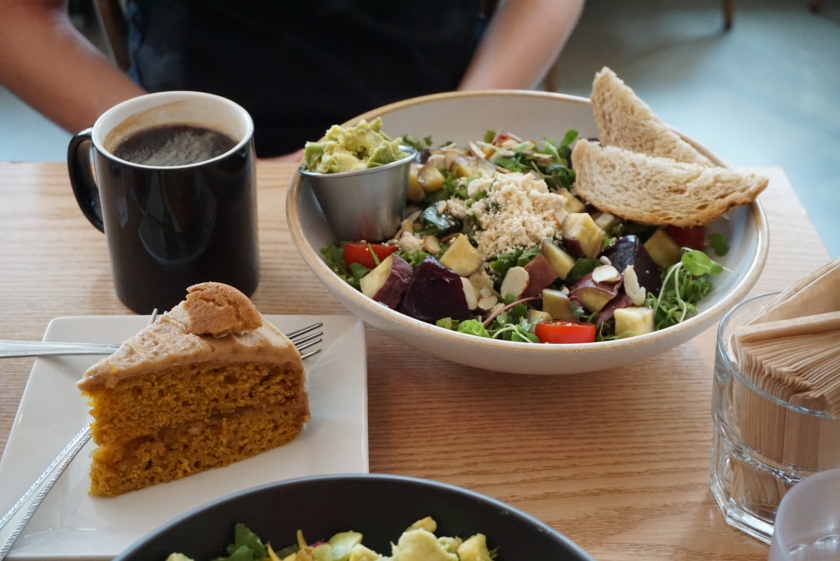 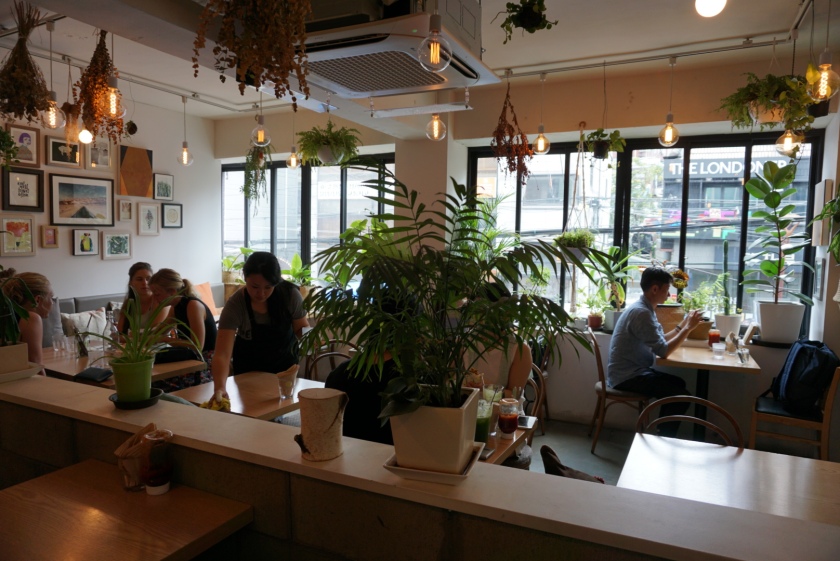 You wouldn’t find this place by just walking by. You have to know where it is located, because the entrance is so hidden. From the inside it’s just beautifully decorated with plants, which created a relaxing and fresh atmosphere. The menu was definitely exactly for what we were looking for. The whole restaurant served only vegan drinks and dishes. We could choose our drinks from a variety of coffee, tea, smoothies, juices or soda. I took a green smoothie, where else Elle drank an American coffee. The food menu had not only delicious salad, superfood or pasta bowls, but also sandwiches, wraps or even vegan cakes and desserts. Yummy! I took a superfood bowl with lentils, rice, avocado, “cheddar cheese”, tacos, salsa and so on. Elle ordered a salad with sweet potatoes and “feta cheese”, as well as a vegan pumpkin spice cake. Yuuuummy!

Our waitress was by the way German. She lived for one year in Japan and now already for two years in Korea. Crazy! 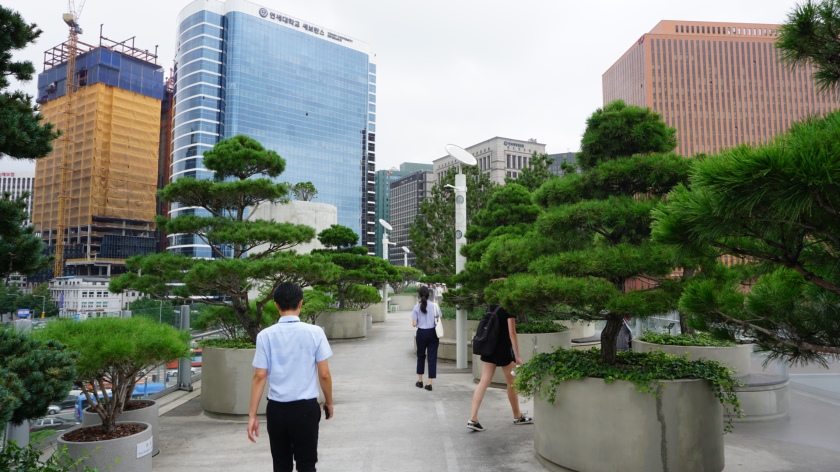 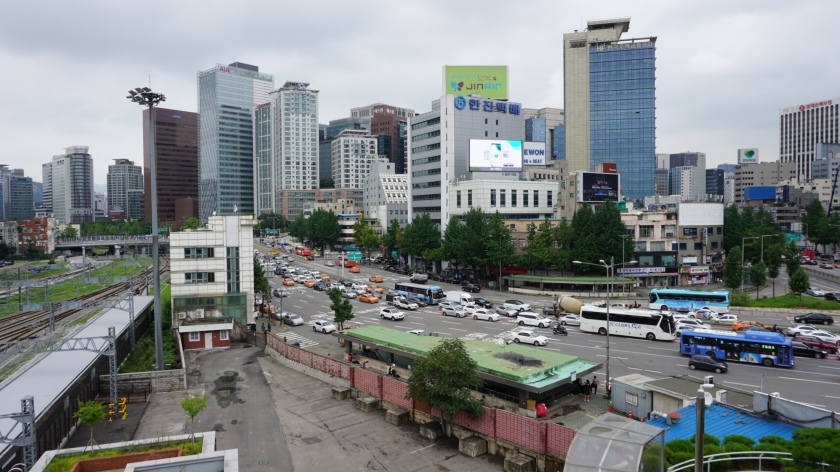 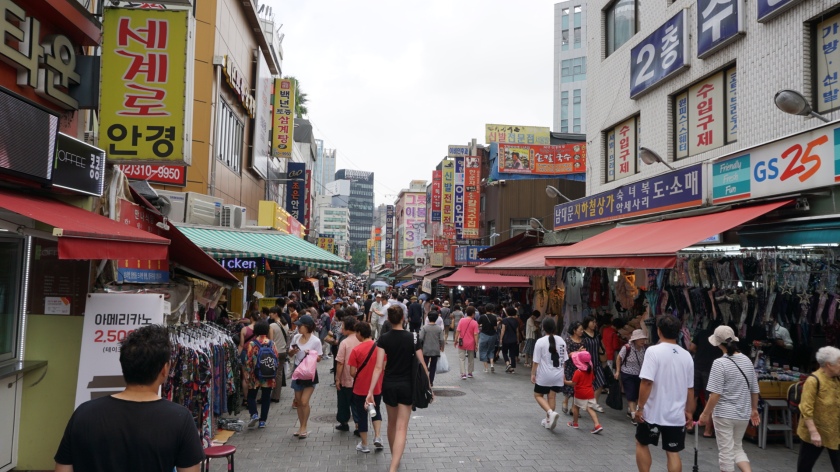 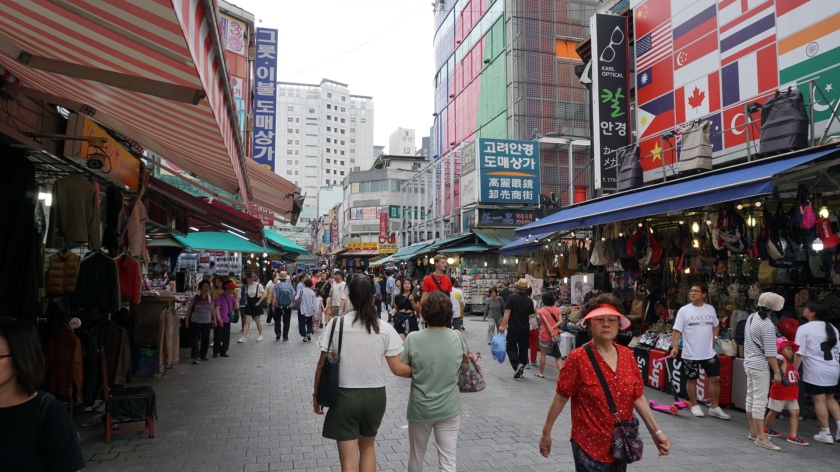 After finishing our delicious meal, we headed to Seoul Station. From there you can walk across Seoullo 7017, which is a bridge above the city. The whole way is full of hundreds of plants. When walking to the end and following the street you come directly to Namdaemun Market. The market area is huge and has a lot to offer. It is mostly specialised in clothes, accessories, souvenirs, but also snacks. Probably the most famous snack are Almonds, which you will find here in any flavour you could possibly think of. The most popular flavour is the Honey Butter. But there are Almonds with Wasabi, Chilli, Cookies and Cream, Seaweed, Strawberry Yoghurt and so on. Thousands of flavour combinations! 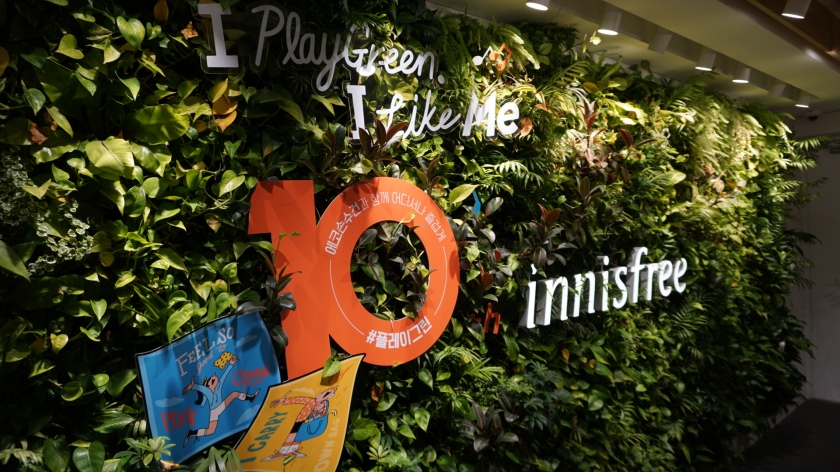 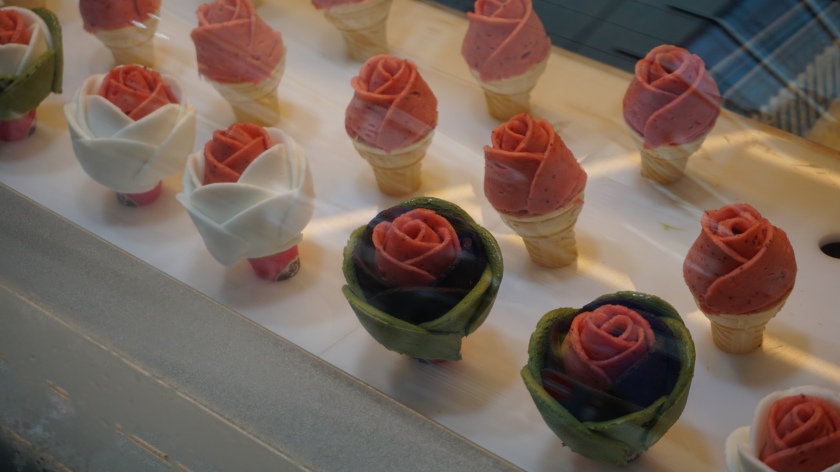 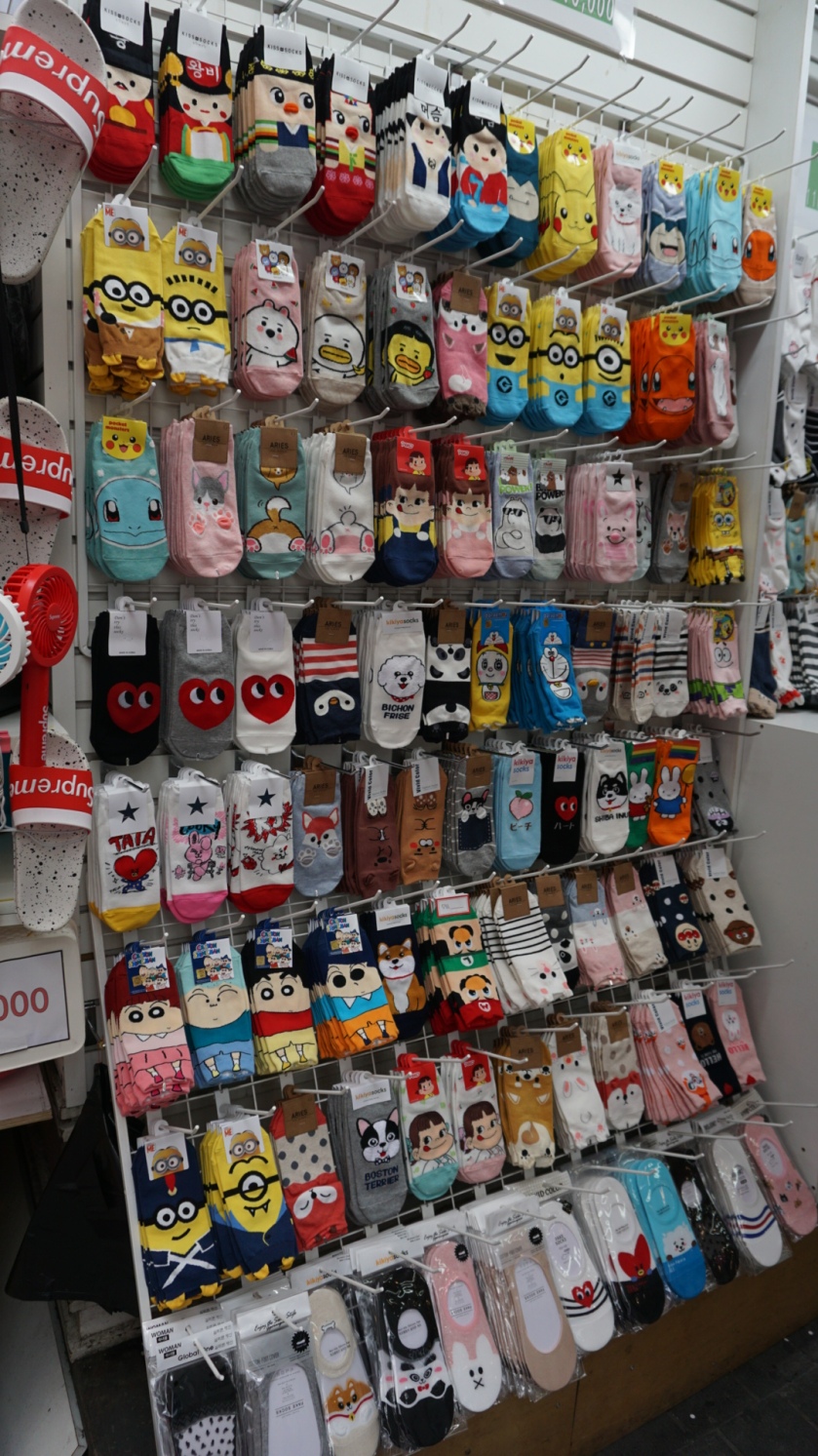 From the market we walked to Myeongdong, the centre of skin care. As you know, we went there on our second day around dinner time, to see the night market. Now it was time to get to see all those shops in detail. It is crazy how Koreans are fascinated about skin care. I feel like Asia in general is much more interested and hyped about caring their skin, in order to look as young as possible. In Europe I don’t really have the feeling that we care so much about it, which we maybe should. I am not really informed about all those products, but everyone told me that I have to buy Korean sheet masks. And that’s what I did. We went to Innisfree, well known for their natural ingredients. It was an experience just walking inside the store. They also have a lovely café on the first store.

Afterwards I needed to say goodbye to Elle. Her flight back to Tokyo was an hour earlier than mine. Furthermore, we flew from different airports back. Therefore, she went already back to the hotel to pick up her luggage, where else I spend a little bit longer in Myeongdong. I went in some other shops, like the Etude House, Olive young, Holika Holika, Tonymoly and so on. I bought more masks, until I figured that my credit card isn’t working. The whole time, I used the Japanese yen I had from Japan and changed them to Korean Won. But I ran out of cash and there wasn’t another Currency Exchange nearby. That’s why I needed my credit card. Maybe the card got blocked because I am in a different country again. Such a shame. I wished I could have bought some more products. On the other hand, I wasn’t even able too, because I was travelling with carry-on luggage, which means that I am not allowed to take liquids over 100ml with me. Well… 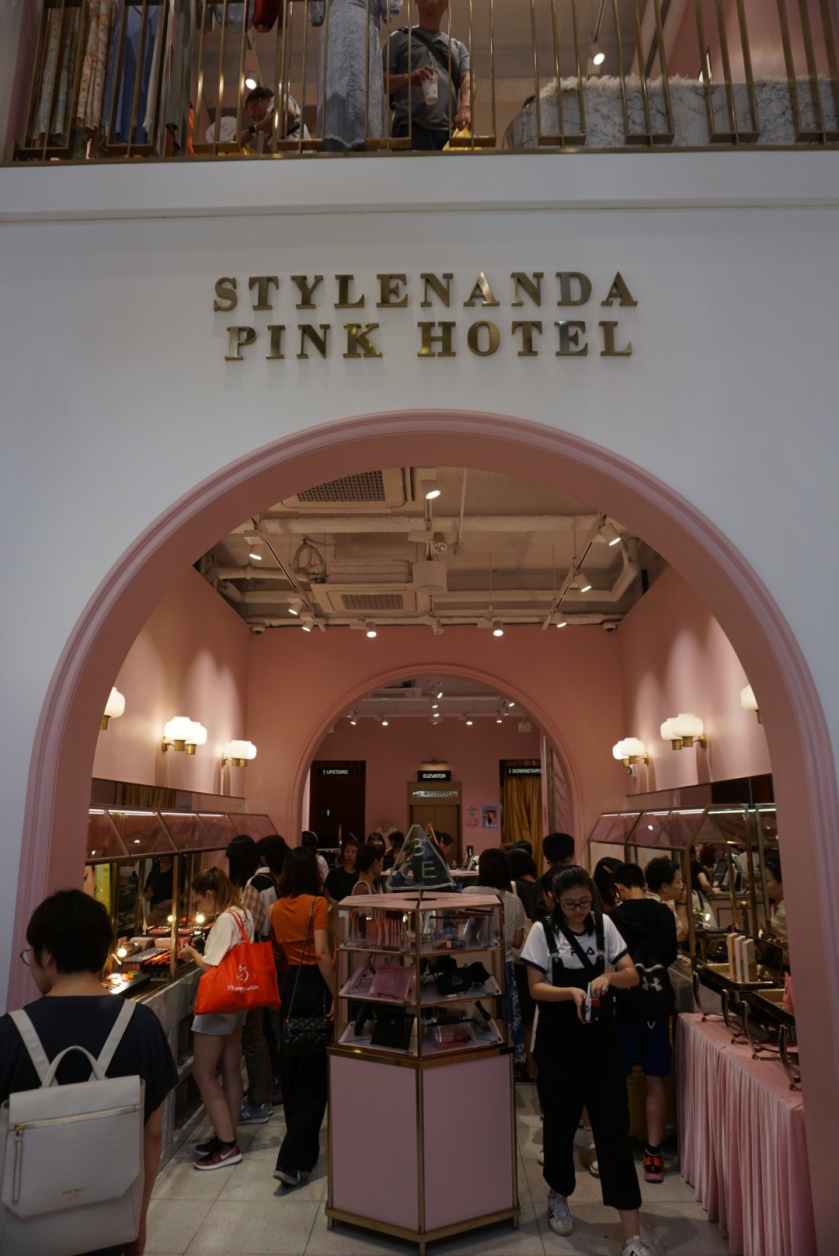 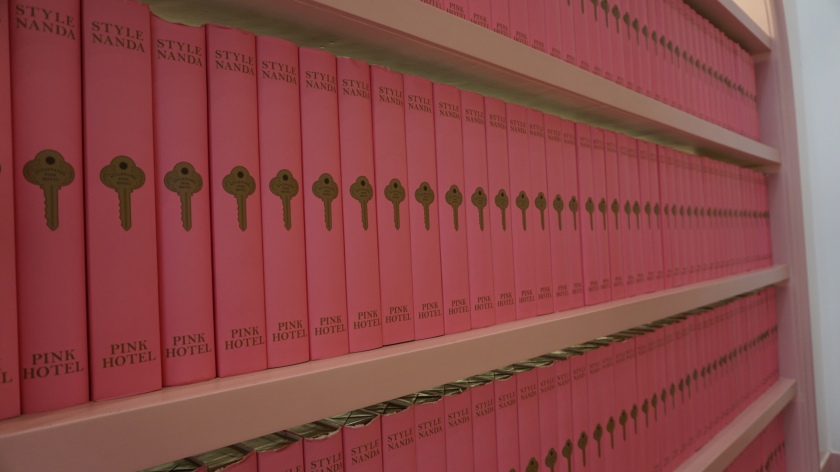 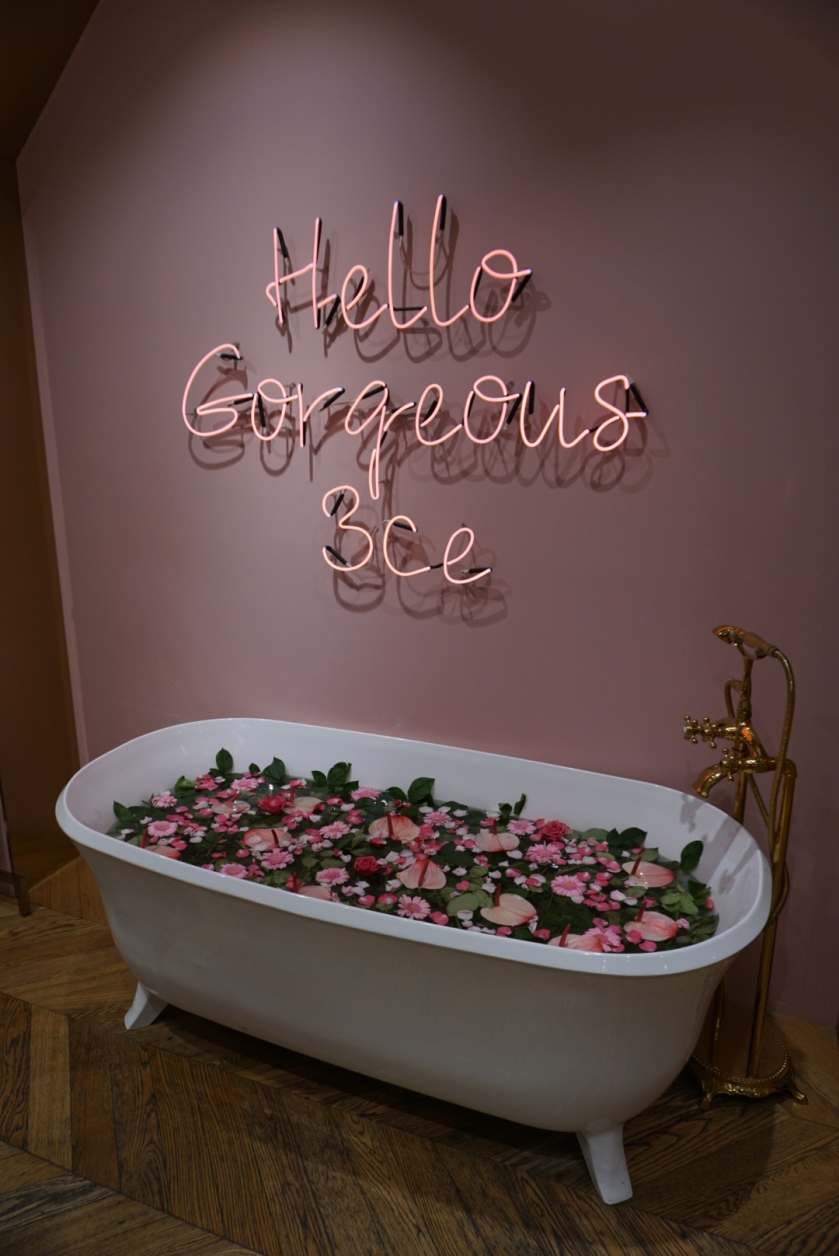 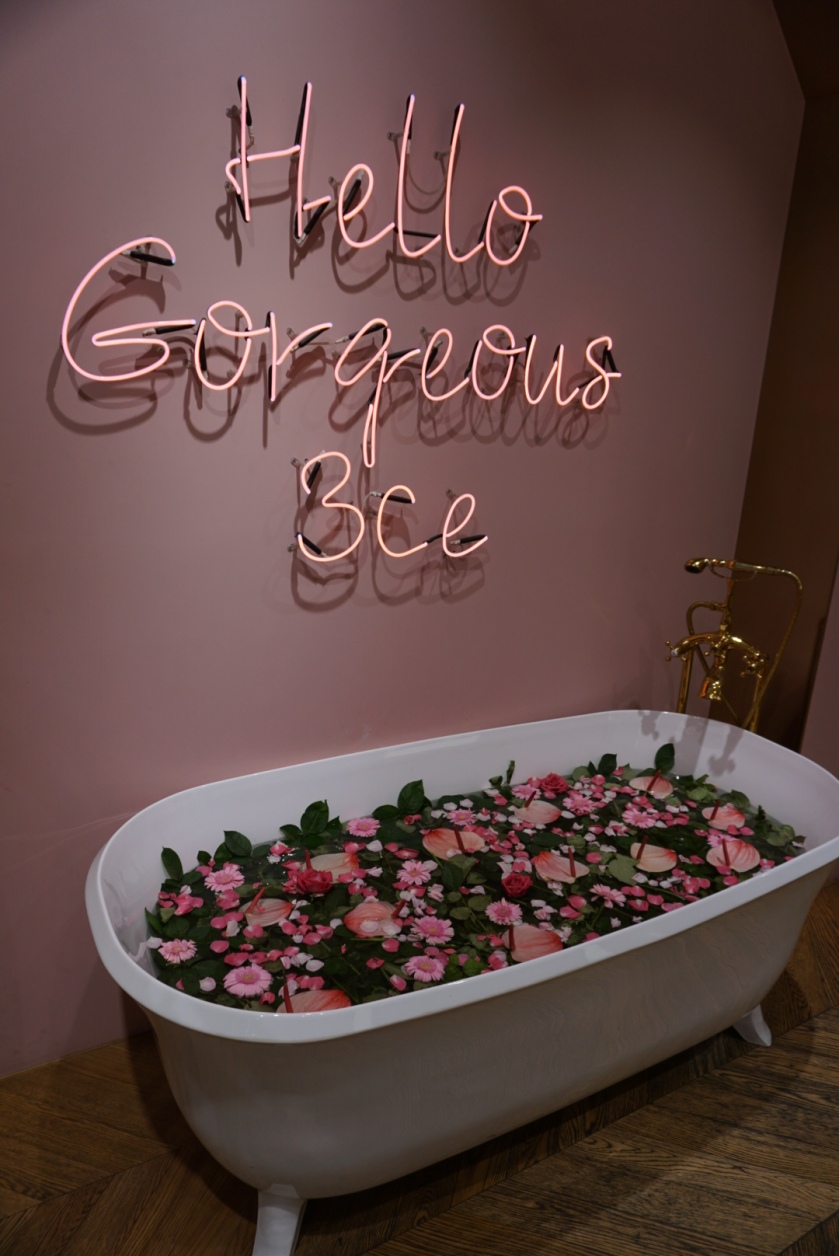 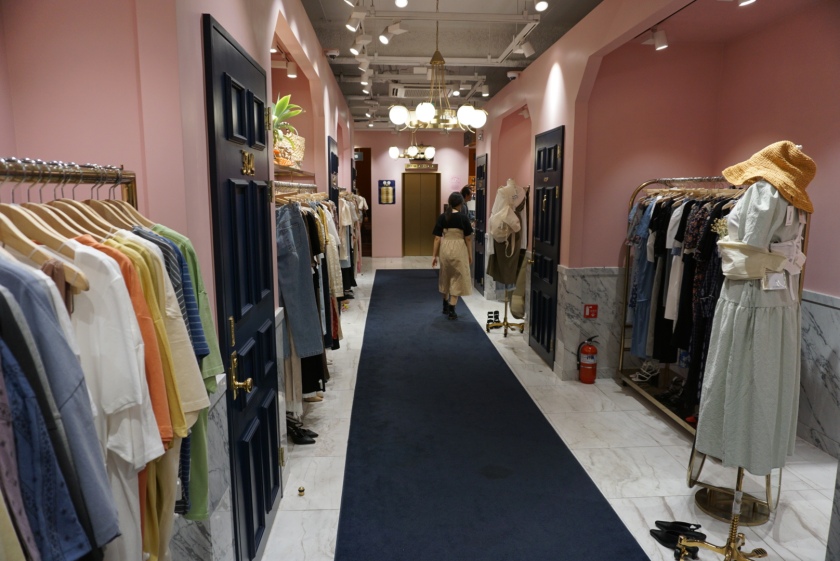 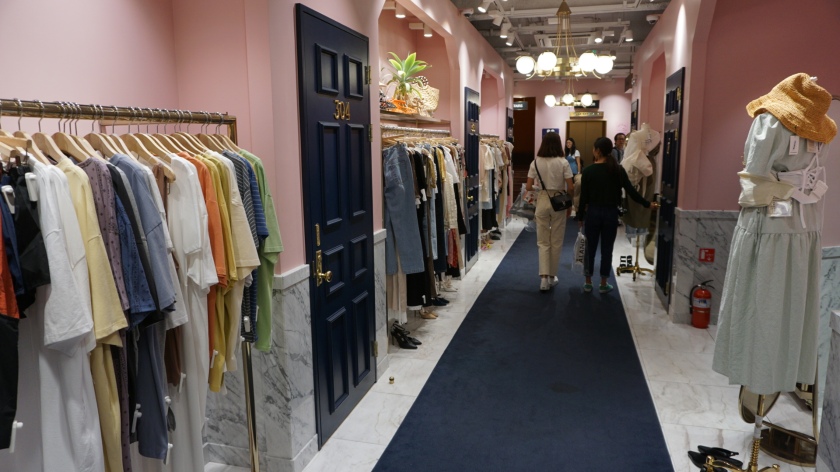 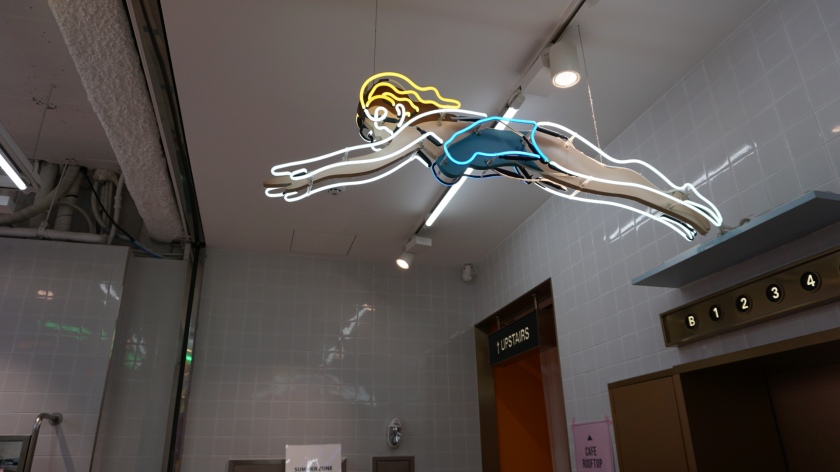 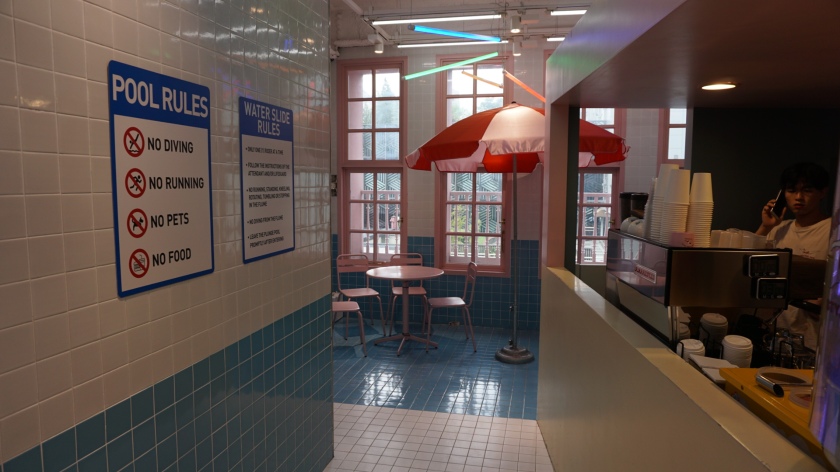 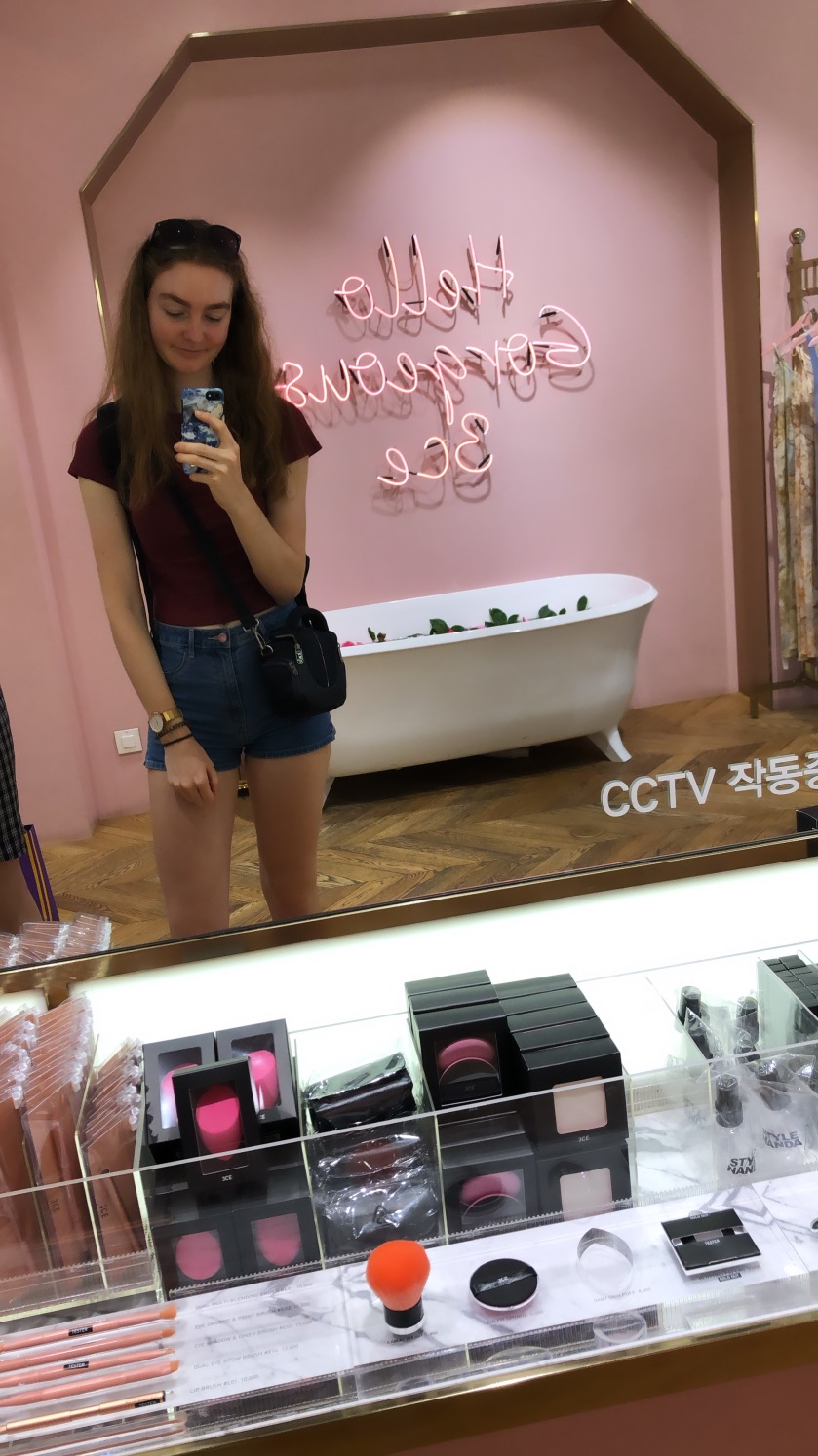 Last but not least I had a look at Stylenanda. Stylenanda is especially famous on social media. But in my opinion, it’s worth the hype. The appearance on his own is just so extra and not comparable to something else that I have seen before. It is a small, but extremely tall, pink house in the middle of Myeongdong shopping street. Stylenanda is basicalla a normal shop, where you can buy clothes and make up. But the concept is phenomenal. It is made like a hotel. When you come inside you have the lobby and the reception. The second floor is the Spa and Make up room. Here you can buy obviously make up and spa products. The design is just so beautiful. In the third floor you find the Rooms. You will find mostly clothes here. The next floor is design like the laundry of the hotel. Last but not least you have the pool area on the top. Inside you find a café and on the top of the roof a chilling area, which was because of the inconsistent weather closed. Nevertheless, it was so fun to get to know the concept of Stylenanda. For girls, definitely a must visit when coming to Seoul. 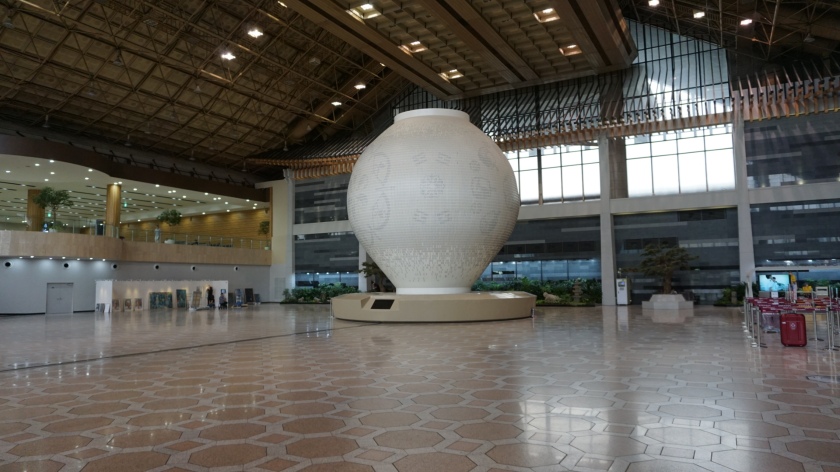 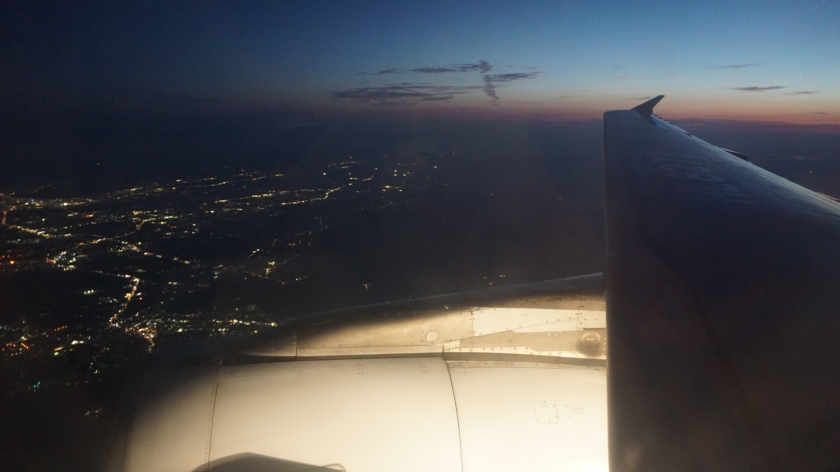 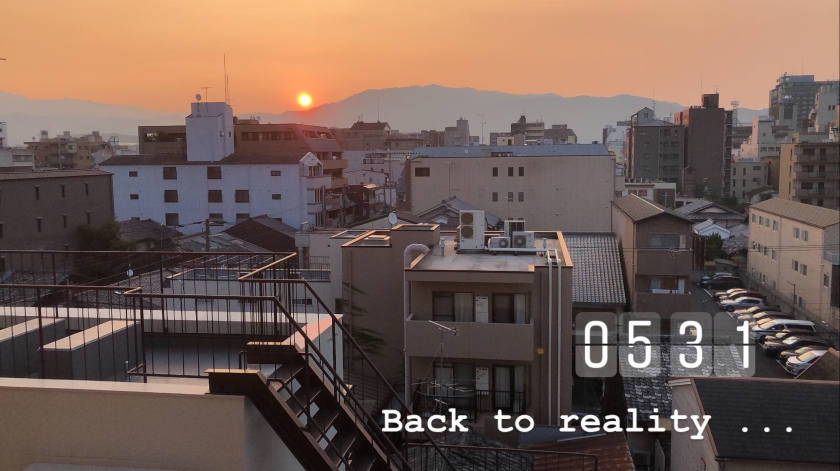 And that was it! I made my way back to the hotel, got my suitcase and took the subway to the airport. My flight got delayed again. Therefore, I arrived in Osaka very late. It was so weird when I went through the passport control. Because I have a residence card, I need to go through a different check than the tourists. Everyone thought I am at the wrong place, because I obviously do look like a tourist. They were so shocked when I showed them that I do have a residence card of Japan. So funny! I took the bus from Kansai Airport to Kyoto and from there a taxi back home. I have to say, that it almost feels like coming home when entering Kyoto. In kind of is! It was already 11pm when I arrived. I couldn’t believe that I have to work at 6am the next day. Great!

To sum up, I can definitely say that Korea overwhelmed me. I didn’t have any expectations or much knowledge about this country. And that’s probably why Korea wasn’t really on my list. But I am so glad that I took the chance to experience a country, that I can’t compare with any country that I have visited before. It was a mixture of Japan, Southeast Asia and Europe. The life there is much more relaxed and less strict than in Japan. In Japan it seems to be that the streets are perfectly clean, the people perfectly polite, the rules are perfectly followed, and the country perfectly safe… and that’s all good! But it feels sometimes a little bit too perfect… maybe fake? It is hard to describe, but I felt Korea is a good mix between the relaxed south east Asian atmosphere and the perfectionism of Japan. The food is delicious and has more spices, fruits and vegetables, which I love. Most of the people are speaking better English than they do in Japan. People are in my opinion not as friendly as they are in Japan, but much more direct. Furthermore, Korea is much more affordable. It is a great place to travel, but if it’s a great place to live as well? I don’t know. I definitely have to say, that I see Korea and Japan from two different perspectives. Because I live and work in Japan, I definitely see the country from a more local view. Korea was just a short and touristy trip. But at the end, both countries are worth a visit! Seoul was definitely good for my soul!